Battlefield 2: Modern Combat is a modern military first-person shooter developed by DICE and published by EA for the Xbox and PlayStation 2 on October 24, 2005. The first game in the Battlefield franchise to be released on consoles, the game is based on Battlefield 2 for the PC (though it is not a straight port). Along with a new single-player campaign (the first Battlefield game to do so), Battlefield 2: Modern Combat supports online and LAN multiplayer for up to 24 players, with two game modes (Capture The Flag and Conquest) and 16 maps to choose from. All the maps are exclusive for the console game, they are not the same maps as in Battlefield 2 on PC.

Similar to Halo 2, Battlefield 2: Modern Combat allows players to create and join clans, where clan leaders can customize their clan (name, tag, and motto), promote regular players to "co-leaders" for member management, and participate in clan battles (two-round matches that ties into a specialized "clan leaderboard").

The game was later ported to the Xbox 360 on April 11, 2006, featuring graphical improvements and improved Xbox LIVE functionality. A PSP version had also been announced, but was cancelled to let DICE focus on the game's spiritual sequel, Battlefield: Bad Company.

The singleplayer campaign focuses on a war between the North Atlantic Treaty Organization (NATO) and China which takes place in Kazakhstan. Propaganda is being broadcast which accuses both sides of war crimes, mean while the player is switching between sides fighting for each one. Eventually the player chooses a side to fight the war with who is then victorious in the war. A terrorist organization, named the Burning Flag, reveal that they were responsible for causing the war between NATO and China. The winning side of the war now must fight against the Burning Flag and stop Commander 31, the Burning Flag leader, from launching nuclear missiles.

Multiplayer mode is similar to that of Battlefield 2 for the PC, it has two game modes; Conquest and Capture the Flag.

Capture the Flag takes place on a smaller version of maps which means less vehicles and closer infantry combat. Each team holds a flag in their spawn point which the enemy team must capture to win. A player picks up a flag by walking over it, he must then carry it to his own base to receive a flag capture point. The flag is returned to a team's base by killing the person holding it and then walking over their own flag.

The multiplayer component of the game features 16 maps, each pitting two of the game's three factions against each other. The maps are:

Battlefield 2: Modern Combat requires 6.6GB of space to install on an Xbox 360 HDD. 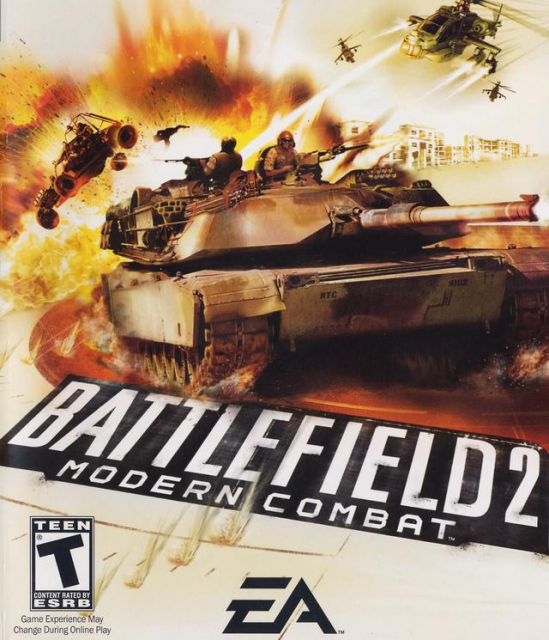