Metal Gear Solid 2: Substance is an updated version of Metal Gear Solid 2: Sons of Liberty containing the original game while adding hundreds of VR missions, a theatre mode and more. It was originally released on the Xbox and later made it onto PS2 and PC.
PlayStation 2 Xbox 360

The main addition to this new release was the 350 VR Missions and 150 Alternative Missions similar to Metal Gear Solid: VR Missions released on the original PlayStation. This gave players the chance to guide either Snake or Raiden through timed virtual missions and getting to the end of a set course. By progressing through the missions, the difficulty of each course increased, and in time, different costumes for Snake and Raiden would unlock, each of them providing a small twist on the gameplay and increasing the difficulty. the mission types included:

The goal of this mode is to reach the end of the level without being spotted. If the guards see the player it results in game over.

The goal is the same with the exception that the player must eliminate all the enemies before reaching the end.

This mode tests the player's aiming and shooting skills against moving targets. Each weapon type has its own subset of missions, these include:

A mix of several modes played in first person mode.

A variety of timed objectives ending with the Zako Survival challenge. The player must survive waves of increasingly agressive soldiers only to face a Giant Soldier in the end.

With the aid of sensors the player must dismantel bombs before they go off.

The player must kill all the enemies though the game does not end when the player is spotted. Instead the soldiers call for back up.

The player must hold up the enemies without being spotted.

The player must photograph a specific and sometimes cryptic object, poster or person in any given environment to complete the level.

Raiden and Snake are available from from the get go while their costumes must be unlocked by completing missions. For each of these costumes there are small alterations in gameplay as well as in music. For instance: the music in the Snake (Tuxedo) missions is meant to evoke James Bond and the Snake (MGS1) missions features music from the original Metal Gear Solid: VR Missions.

Snake Tales gives players the chance to control Solid Snake through five story based missions on the Big Shell and Tanker. The final boss on the Tanker, Olga Gurlukovich, is replaced with Meryl Silverburgh from the original Metal Gear Solid. Unlike the main game this mode does not feature cutscenes, instead the story is told through pages of text.

These two new features were previously exclusive to the original PAL and Japanese versions of the game, but have later been implemented to all versions of Substance. Boss Survival gives players the chance to re-live each boss battle within the game. Each battle is timed. The casting theater allows players to watch different cutscenes and replace the character models.

Essentially a demo for ‘Evolution Skateboarding’ the mode was exclusively added to the PlayStation 2 version of Substance. The player can use Snake or Raiden to complete small objectives through ‘ Big Shell’ themed levels. These objectives vary from blowing up parts of the level to collecting dog tags. Skateboarding mode is not included in the Metal Gear Solid HD Collection, and it is the only feature that was cut from the HD version of Metal Gear Solid 2. 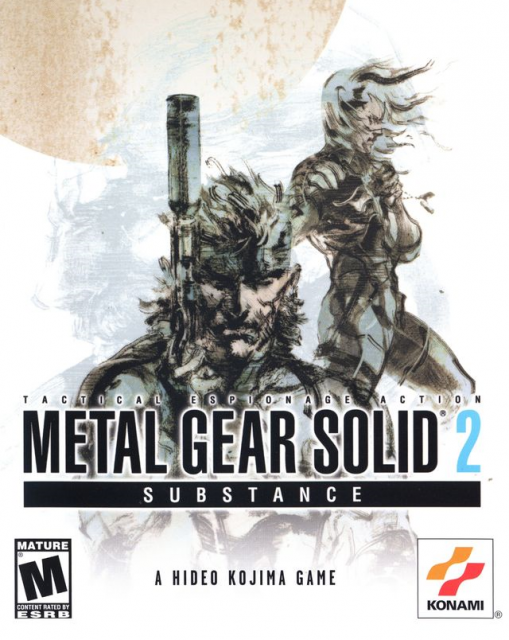