The direct sequel to the 1994 arcade game Killer Instinct, featuring reworked gameplay mechanics and a revamped roster (including three challengers from 2000 years in the past).

Killer Instinct 2 (sometimes stylized as KI2) is a 2D fighting game developed by Rareware and released by Nintendo (in conjunction with Midway) for arcades on November 25, 1996.

The game's story takes place shortly after the original, with Eyedol's death at the hands of secret agent Orchid accidentally sending the Ultratech building (along with some of the tournament's combatants) two millenia back in time and releasing the powerful demon lord Gargos. Each character has multiple endings, depending on whether they performed finishing moves on certain opponents.

The game was later ported to the Nintendo 64 (as Killer Instinct Gold) in North America (on November 25, 1996) and Europe (on July 4, 1997). Released by Nintendo, this port features fully-rendered 3D backgrounds, new game modes (including advanced Training modes, practice modes, and cutomizable team battles), customizable options, and unlockable content. This version was later included (without Nintendo branding) in the 2015 Rare Replay compilation for the Xbox One.

The original version of the game later received a downloadable port for the Xbox One as part of the late-2013 reboot of the series. Ported by Code Mystics and published by Microsoft, this version includes a new training mode and online multiplayer. It can only be obtained by purchasing the "Season 2 Ultra Edition" (later the "Definitive Edition") of the reboot.

The game engine is a lot like the original Killer Instinct and certain improvements have added some depth to the gameplay. A new power meter was added to store energy for super moves and super linkers. The auto doubles have been included again, but there is now an option for manual combos.

The game includes 10 playable characters and 1 unplayable boss. All of the characters from the previous game return with the exception of Chief Thunder, Cinder, Riptor, and Eyedol. 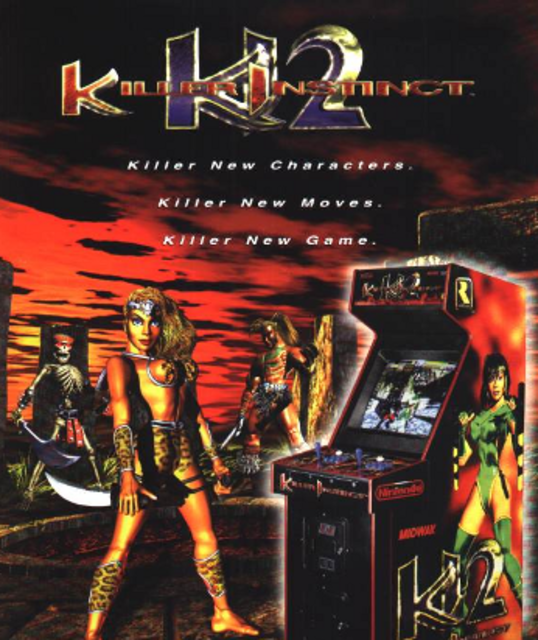