Perfect World is a MMORPG that takes place in the world of Pangu. A world of fantasy based around Chinese Mythology. Developed by Beijing Perfect World.

Perfect World is a Free-to-Play MMORPG developed by Beijing Perfect World. The open beta of the official English game, Perfect World International, was released on September 2nd, 2008 and was designed for North America, Europe, and Australia. Some of the key features of the game is a simulated day and night cycle and the ability to fly to explore the map with ease.

Perfect World features a guild system that allows players to create or join other player created guilds. Once in a guild, the player can chat with other guild members, as well as participate in territorial battles against other guilds.

Territorial Battles are huge PvP events with up to 80 players on each side. The winning guild gains control over territory, which gives it a big money income.

Perfect World features a large amount of fashion clothes that allows the player to further customize his character. Those clothes have to be bought from the games item mall. (A micro transaction based store)

When creating a character, the player can customize almost any aspect of his or hers appearance. This includes anything from color of the skin, the size and weight of the character, as well as the shape of the head, ears, eyes, etc.

Perfect World allows players to learn four different crafting skills: Blacksmithing, Tailoring, Crafting and Apothecary. Those skills allow player to create almost any item featured in the game ( with the exception of item mall based items).

In order to get married both anticipating players will have to unlock an item from the Cash Shop. When married, users will obtain two marriage related skills and a husband/wife title in the game.

Taking the place of a subscription fees, Perfect World utilizes a Cash Shop which allows players who want to enhance their character or experience with the game a chance to purchase items with real currency. The controversy behind microtransactions in MMORPG's is that the game cannot be well balanced, and those who are willing to dish out some cash have an advantage over the rest of the userbase.


When creating a character, the player first choses a race and then additional choses one of the two classes available to each race.

The most generic of all races, Humans can choose between the Warrior or the Mage class.

The Human warrior class. They can utilize many different kinds of weapons, including axes, swords and knifes.

The Human magical class. Although physically weak, they can use elemental spells to quickly destroy their foes from afar.

Elves are the only race that can fly from the very start of the game. They focus on ranged damage, as well as supportive skills. They can chose between the Archer or the Priest class.

Archers use bows do deal large amounts of damage from afar.

Priests use healing and supporting magic to aid their teammates. They can also use water magic to hurt their foes.


The Werebeast is the most resiliant of all classes, as it has both a high defense rating as well as a high hit points, making him the tank class of perfect world.

The Werefox is the only class in the game that can tame and summon pets to her aid. She can also use poison based spells to harm her enemies.

The newest addition to the roster in Perfect World. Tideborn are fish-like creatures, with the options to become either Assassins or Psychics.

Quick and deadly with their daggers, Assassins rely mainly on Dexterity to evade enemy attacks and cause critical hits.

Psychics use powerful, but quick spells to eliminate their foes quickly.

This event is open to all players, to begin the player must enter their major cities arena and open the treasure chest inside. The chests can only be opened once in the instance and the player who opens the chest will be susceptible to attacks. Results from opening the chest varies from gaining potions to fighting difficult monsters.

To participate in the event a player must be level 40 and have a mount. The course will take participants throughout the lands of Perfect World, the winner of this event will receive a gold medal and may continue with quests, and the runner up will be given a speed badge which they may use or sell to other players. Flying is prohibited during this event.
Lineage: The Blood Pledge Lineage II: The Chaotic Chronicle The Lord of the Rings Online: Shadows of Angmar EverQuest II CABAL Online Ultima Online Asheron's Call Asheron's Call 2: Legions City of Heroes Guild Wars Last Chaos Warhammer Online: Age of Reckoning Age of Conan: Hyborian Adventures Final Fantasy XI Online Guild Wars: Eye of the North Guild Wars: Nightfall Anarchy Online Anarchy Online: Alien Invasion Anarchy Online: The Notum Wars Champions Online RF Online Silkroad Online Florensia Fantasy Earth Zero King of Kings 3 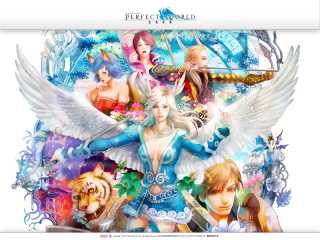