Known as the granddaddy of the "Quick Time Event", Dragon's Lair is an interactive cartoon that lets players help guide the actions of brave knight Dirk the Daring, as he ventures through the dangerous castle of Singe the Dragon in order to rescue his beloved princess Daphne.

Dragon's Lair was first released as a Laserdisc arcade game in 1983 by Cinematronics, featuring artwork created by former Disney animator Don Bluth. Because of the relatively large storage capacity of the laserdisc, Cinematronics were able to create a game that featured higher fidelity graphics than other contemporary games. It was also a highly influential title of its time, opening the floodgates to several other laserdisc titles, such as Space Ace, Bega's Battle, and Cliff Hanger.

Dragon's Lair puts players in the greaves of Dirk the Daring, a knight trying to rescue the Princess Daphne. Daphne has been kidnapped by Singe the Dragon, and is now being held in the castle. Dirk's adventure will have him battling monsters and the castle alike as he attempts to save the day.

The gameplay of Dragon's Lair varies wildly from version to version, a common misconception is that the "Quick Time Event" game is the only version of Dragon's Lair in existence, however on platforms like the NES and SNES, Dragon's Lair is a 2D platformer requiring players to navigate multi-tiered stages, finding one of multiple exits to complete a level and progress through the castle to the final boss fight. The QTE-focused game only appears on certain platforms, in this variation of the game players watch and sometimes control Dirk through his adventures though Singe's castle. At very specific intervals during the game, Dirk will be in a situation that will force the player to control him, choosing which to direction to move him in around or having him attack enemies. Each of these sequences would trigger a new scene in the movie to start playing, similar to the way a DVD can have different "chapters" to select at any time. Choosing the right action in these confrontations would cause Dirk to circumnavigate his obstacle with aplomb, while choosing the wrong action would trigger a sequence in which Dirk is killed. The player is helped out by some degree of input clues such as flashing lights letting them know the direction to push. Added help to these sequences was added in the iPhone version which by default causes the on screen controls to flash the correct input, although this feature can be turned of if desired. The limited, simple button pressing gameplay set to cinematic action that would later evolve into the Quick Time Event, featured in games like Shenmue, Resident Evil 4, and Heavy Rain.

In the original arcade version, the castle's rooms were presented in a semi-randomized order. The player would advance to a new room regardless of whether they could complete the previous one, however before the final confrontation with the dragon, the player would be required to replay the scenes they failed. In addition many of the rooms played "in reverse" (meaning, a jump to the left became a jump to the right the second time a scene played) meaning that even if one were to memorize every room in the castle they would still have to keep a keen eye on the layout of each room. The high score table was usually part of a separate cabinet extension.

An experienced player who memorized every input for every scene could complete the game in less than 10 minutes. These experienced players soon realized that the player's score was increased with every successful input, regardless if the scene ended in success or failure. Thus, the score could be inflated by purposely dying before the last move of a long scene, and saving the last "life" for the final scene with the dragon. As new lives were rewarded throughout the game, these players could extend their play time to 20 minutes or more on one credit.

Dragon’s Lair was the brain child of Rick Dyer, president of Advanced Microcomputer Systems, who, supposedly, realized that video games needed top quality animation during a viewing of the animated film The Secret of NIMH. He also claims that the Atari 2600 classic “Adventure” was another inspiration for Dragon’s Lair. The entire game was animated by Disney Animator Don Bluth at his personal studio. The game was made in less than 7 months for a mere one million dollars (cheap considering the work they were doing with new technology). The animators on the game couldn’t afford to hire real models to provide an appropriate frame for the Princess Daphne, so Cinematronic’s team apparently used Playboy magazines as an inspiration.

On March 19th, 2012 it was announced that Dragon's Lair was coming to Xbox Live Arcade. The port is developed by Digital Leisure and published by Microsoft Studios. The Xbox Live Arcade port includes support for the standard controller, as well as Kinect. 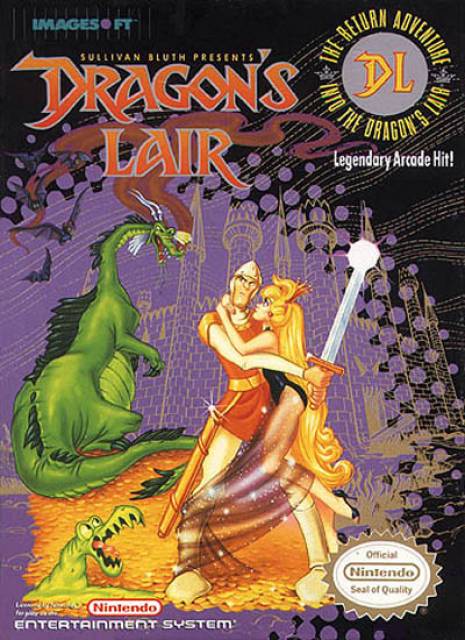