Defense Grid: The Awakening is a 3D tower defense game released on December 9th, 2008 on the Steam platform. Additionally, a version was later released for Xbox Live Arcade on September 2, 2009. The PC version contains 20 different maps. Each map can have multiple variations on the conditions, such as making the enemies harder or reducing the amount of resources the player has access to. There is a light story narrated by the player's AI companion, which involves the destruction of human civilization by a race of interdimensional aliens, the enemies in the game.

Defense Grid is based on placing turrets of different sorts in special squares on each map to prevent the alien enemy from stealing the player's power cores. Each turret has its own amount of damage and range to attack the enemies. The enemies enter through one or two different locations and take the shortest route to the player's power generator. If the aliens make it to the generator, they steal power cores from the AI companion. The aliens will then attempt to escape with the cores by making it to an exit location. Additionally, there are airborne enemies with their own path through each level independent of the towers or level geometry. Unlike other tower defense games, you are allowed to completely block the enemy's path with towers, but doing so forces the aliens to path between the towers. This allows the player to either make paths with no towers that the enemies must go down or just cover every square to try to do even more damage.

As a Steam-powered game, Defense Grid has Steam achievements, leaderboards, and integration with other steam services. The game was on sale on steam from February 16th to March 2nd, 2009 for 25% off ($14.99), and in May 2009 as part of a weekend deal that put the game 75% off (5$). On March 3, 2010, the downloadable package originally only available to the Xbox Live Arcade entitled Borderlands which contains four new maps was released for free to Steam users.

You Monster: The You Monster DLC pack is more like a full expansion pack, complete with a full campaign, storyline, and guest star GLaDOS. This DLC also provides 8 new maps to play, complete with devious twists on the classic gameplay, and was released December 7, 2011.

Containment: An 8 level DLC pack the was funded by Kickstarter. It picks up after the event of Defense Grid and leads to the sequel Defense Grid 2. It was released on January 22.

These enemies can be harmed by any weapon except missiles (that only target air units).

These enemies follow air currents to the power core (and not the roads). Air units can be damaged by guns, cannons, and missile towers. If an air unit captures a core, it is unrecoverable.

Shielded enemies are well protected against fire-based weaponry. Use guns and cannons to quickly whittle away the shield. They are vulnerable when the shield is down.

Stealthed enemies can only be detected while in range of a command tower or otherwise very close to any tower. They are still suseptible to area damage even if they are not detected.

A free Gamer Picture is unlocked as the demo on Xbox Live Arcade is started.

Unknown to most people who have played Defense Grid, the gun tower is the almost game-breakingly useful tower. Since it is the first tower you have access to, many assume it to be less useful as more towers become available. This couldn't be more untrue and, in reality, most of the more difficult maps can be beaten while earning a gold medal by using this tower exclusively. The main reason behind this is that it's cost-damage ratio is actually much higher than most other towers; a level 3 Gun tower is cheaper than many level 2 towers. In addition, it is the best tower versus shields. 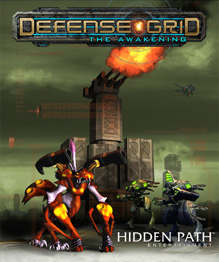