Thief: Deadly Shadows is the third game in the Thief Franchise. It continues the exploits of series protagonist and master thief, Garrett, in a fantasy world that merges elements of the late medieval era with the Victorian age.

The previous two games in the series – Dark Project and Metal Age – were developed by Looking Glass Studios and were well known for their innovative stealth based gameplay. However on May 24, 2000, they were forced to close shop due to financial problems. Eidos Interactive, the publisher of Thief games, were able to secure the rights to Thief and eventually assigned the task of developing Deadly Shadows to Ion Storm Austin.

Thief Deadly Shadows was released simultaneously on May 25, 2004 for PC and Xbox unlike previous games in the series which were PC exclusive. In addition, the game was developed on a heavily modded Unreal 2 engine, as opposed to the Dark Engine, which was used in previous Thief titles. Being a new engine, the game was able to introduce better lighting and dynamic shadows to the enviornment. Garrett needs to adapt to the constantly changing environments and keep hidden in the shadows to avoid being detected. Another addition made to the game was the ability to play in third person view and switch between perspectives while ingame.

For the first time in a Thief game, slightly restricted free-roaming maps were introduced. In previous Thief titles, the player would be directed from mission to mission via a movie clip and a textual briefing. However, in Deadly Shadows, the player is allowed to roam the streets to get to the mission while being able to interact with pedestrians. Also new to the game is the way the player earns money from loot and buys equipment for missions. Previously, the player would automatically be assigned a certain amount of gold after the completion of each mission which could be used to buy equipment as necessary for the next mission. This was all done through menus and was very simplistic. In Deadly Shadows, the player has to sell his loot in order to get gold and similarly buy equipment by visiting stores in person.

The game also introduces role-playing elements where the player can choose to “ally” with the four opposing factions – the Keepers, the Hammerites, the Pagans and the City Watch. The player can benefit from allying with either faction by gaining mission bonuses. For instance, allying with the Hammerites would potentially allow the player to roam without fear in their territory and also provide protection from other common enemies such as Pagans or the City Watch. However, allying with a faction does not change the outcome of the game as one would expect in a pure role-playing game where the player has a much larger impact on his/her enviornment.

The keepers consist of a group of people that oversee everything in the city and work behind the scenes to maintain the "balance" in the world. They are known to be very mysterious even to Garrett himself. Mostly they are non-violent, recruiting others to fight their battles. The group usually examines ancient texts to determine prophecies in their quest to always keep the balance.

The Hammerites are a religious bunch, always seen in their red apparel with the Hammer insignia. They believe that 'The Builder' created man and blessed him with tools such as the hammer and chisel to work towards progress. Their main goal is technological progress and to deem oneself worthy in the eyes of the Builder. They are also warriors heaving warhammers, who would readily inflict "justice" upon those that defy the Builder or interfere with their buisness.

The Pagans are generally a non-violent group that are constanly trying to bring nature back into dominance. This conflicts with the goals of the Hammerites and renders the Pagans their natural enemies. However, the Pagans are not to be considered completely harmless. They will do whatever they can to protect their ideals and further their goals.

The main goal of the City Watch is to keep thieves like Garrett in check. They are the natural enemies of Garrett since Thief: The Dark Project. This is the only faction in the game that the player cannot ally with. The City Watch guards willl attack Garrett upon sight no matter the reason and imprison him in Pavelock Prison. However, once Garrrett has escaped from the prison the City Watch no longer arrest him but kill him on sight.

The City as presented in Deadly Shadows can be divided into five distinct sections. Certain sections are restricted during the initial period and unlock as the game progresses. The map on the left indicates the five regions in the city that are open for exploration. Such maps are also present for each section detailing the location of each store with a red handprint and other distinct landmarks as well. Maps are also made available for each mission in a similar fashion.

This is Garrett’s home-base. The north area has a fountain plaza, which has his apartment building and a gate leading north towards Stonemarket. This sections also houses Pavelock Prison, which serves as a side-mission quest if the player is caught stealing by the city guards. Heartless Perry the fence has setup shop in Black Alley, where the player can also find ‘The Well-Equipped Thief’ store. Other locations to note are a gate leading to the Docks in the southeast corner, a guard station west of the Prison and a food stand in the immediate vicinity.

Stonemarket is visually split into two distinct areas and has considerably more city guards and pedestrians than other sections.

The western end has a Tavern in the Plaza and a gate leading back to the South Quarter. Other points of interest in this section are the Terces Courtyard, the Clocktower and a hidden entrance to the Keeper Library.

The eastern end is referred to as Stonemarket Proper. The most prominent location in this section is St. Edgar’s Church which is located approximately in the center. As for stores, the player has access to Black Market Bertha the fence, Marla’s Shop. Cothron’s Armory and the Stonecutter’s shop. Other locations to note are a guard station and a gate leading to Old Quarter.

The Docks are initially quarantined and the player is restricted access. However, access will be provided by the Keepers for the completion of a mission. Inside this section, the player has access to Dahlia the fence, ‘The Undercurrent Store’ and a Tavern. Other locations are a Pagan base and the ship Abysmal Gale at the docks. There are gates leading to the South Quarter and the Old Quarter.

The player has access to Carmen’s Store at the northeast end in this section. Points of interest are the Keeper Compound, Fort Ironwood, a guard station and the abandoned Shalebridge Cradle. There are also gates to Stonemarket, the Docks and Auldale respectively.

This section mostly consists of the city’s upper class nobility or in other words the rich. There is a single entrance to this section through a gate in the western side of Old Quarter. Points of interest are the Plaze to the west, a Pump House in its immediate vicinity, a Museum and a park on the east end (which is inhabited by Pagans). The player has access to the Auldale fence in the southern section.

Below is a list of the equipment and weapons Garrett has available throughout the game.

The shortbow serves as a long-range weapon and replaces the larger version from previous Thief games. The player can potentially use six different types of arrow.

A mechanical projectile device that creates a brilliant flash on impact thus blinding any persons in the immediate vicinity including the player.

This mine can be setup as a trap which would explode once stepped upon.

Does exactly what it's supposed to - restores health.

This flask of blessed water can be used as a lethal weapon against the undead.

This flask of oil can be used to either create a slippery surface on which NPCs would slide and fall for a short distance or in conjunction with fire arrows to create deadly flames that would block a given path.

Similar to the Gas arrow but much more effective due to its larger gas cloud range.

Used to open locked doors and chests that cannot otherwise be opened. In previous Thief games, lockpicking was made simple by having two different picks that could be used on a given lock by the press of a single button. In Deadly Shadows, picks are used by interacting with the lock manually and fumbling around until the sweetspot is found.

These are the replacement for the rope arrow from previous games in the Thief series. The rope arrow was used by Garrett to get to places that would normally be out of reach. Climbing gloves serve the same purpose by allowing the player to scale stone or brick walls. These can be purchased at a store near the Docks.

Thief: Deadly Shadows is backwards compatible on the Xbox 360, but the game is substantially crippled by a flaw in emulation where light sources, such as torches, candles, etc. can be seen through walls and floors from any perspective. 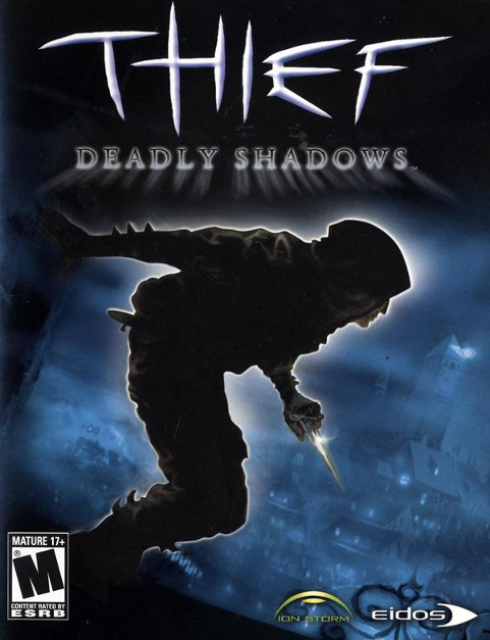