Jill wants to please the Queen but Jill always fails. Jill has to punish herself to reach the top of the dungeon and reunite with the Queen.

Mighty Jill Off is a short-form freeware indie game made for the purpose of exploring so-called Masocore gameplay tendencies. The game combines unfairly challenging platform gameplay with an fitting tale of masochism.

Mighty Jill Off can best be described as a vertical platformer with gameplay focused on using immense challenge to necessitate pinpoint accuracy with platforming skills. The player can jump, float in mid-air and cut off their jump in the middle. The player must use all of these abilities with unfairly perfect timing and angle their jumps around obstacles such as spikes and spider creatures that chase the player.

On October 15th, 2008 an expanded version of Mighty Jill Off was released for free at the same location as the previous version. Jill Off Harder features a second tower available after beating the first tower in under 12 minutes or donating a dollar or more to the Auntie Pixelante blog. The second tower is supposedly even harder than the first and is compared to "The Lost Levels" version of Super Mario Bros. 2.

The plot of Mighty Jill Off is uncomplicated. At the beginning of the game, "the Queen" throws "Jill" to the bottom of a torture dungeon and asks her to climb back up. The player is then tasked with doing so.

Mighty Jill Off was recognized as one of the Top Ten Indie Freeware Downloads of 2008 in Game Developer Magazine (August 2008, Volume 15, Number 7).

The character of Jill makes an appearance in the masocore platform title Super Meat Boy, available on Xbox Live Arcade and Steam, as an unlockable playable character. Her special ability is the power to slow her fall, making her very useful in certain sections of the game.
Seven Minutes Moai Kun Mighty Bomb Jack Jumper Two 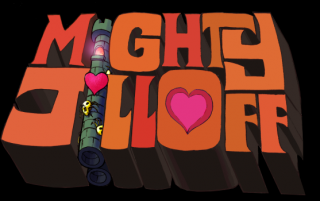