Infinity Ward's second and last foray into the World War II installments of the hit Call of Duty series brings another series of viewpoints of the war in Europe. It's credited as the first to introduce staple gameplay mechanics such as nearby grenade indicators and automatically-regenerating health.

Call of Duty 2 is a historical-military first-person shooter developed by Infinity Ward and published by Activision for the PC on October 25, 2005. It was later released as a launch title for the Xbox 360 on November 22, 2005.

The direct sequel to the original 2003 game Call of Duty, Call of Duty 2 tackles a new trio of Allied campaigns in World War II Europe. The original game's engine have been heavily upgraded (to what is known as IW Engine 2.0) to allow new atmospheric effects and gameplay mechanics (such as automatically-regenerating health and nearby grenade indicators).

It is Infinity Ward's last World War II entry in the series, shifting to modern and futuristic installments starting with Call of Duty 4: Modern Warfare. It was released alongside Call of Duty 2: Big Red One which, despite the name, is more of a sequel to the other console-exclusive entry (Call of Duty: Finest Hour).

The game was later ported to the Mac by Aspyr sometime in 2006. It also ported to mobile phones in January 5, 2006 by Hands-On Mobile as a 2D top-down shooter. The Xbox 360 version was later made backwards compatible with the Xbox One on August 23, 2016, utilizing the system's increased capabilities to negate performance issues present in the 360 version.

Players are presented with a radar HUD in the bottom left of the screen which contains information such as objective points, enemy positions and direction of travel. Most of the objectives consist of things like placing a bomb on a pesky panzer tank, destroying a mortar, clearing buildings of Axis soldiers or simply reaching the next checkpoint. There are several instances where one can choose in what order to complete the mission objectives.

The player may carry two weapons at any time and up to 4 frag and 4 smoke grenades. At the beginning of each mission the player is often armed with a machine gun for close combat and a rifle for fighting at a distance. Either of the weapons can be swapped for weapons found strewn across the battlefield, some of the better equipment is often scavenged from the corpses of the Nazis. The player can also make use of a melee attack when in close quarters.

Call of Duty offers some degree of tactics which often combine a use of grenades with advancing to cover and using one of the three degrees of elevation (standard upright, crouching or crawling). The player character is also able to jump which is useful for negotiating debris.

Much of the gameplay in COD2 revolves around reaching the next checkpoint. There are frequent examples of infinitely spawning enemies which can only be overcome by advancing to a certain position so that the friendly AI units take up a new position. The inclusion of infinitely spawning enemies shapes the way the player will take on many of the challenges in COD2, running and gunning into the fray is often the only option available. Although this provides fast paced, action packed gameplay it can sometimes spoil the sense of realism the title strives to achieve.

Call of Duty 2 has three separate campaigns each of which is split into battles which each have their own component chapters:

Weapons are faction specific but a player may pick up a dropped weapon at any time.

These weapons are only available in multiplayer

Call of Duty 2 provides the player with access to Class Based Multiplayer. The player has access to unique weapons such as the Grease Gun, that are not available in the single player game. The game includes, CTF, TDM, Search and Destroy and Headquarters for modes.

The game also includes multiple maps, based on locations from the campaign. Many Player made maps have been created using the free to download Mod tools provided by Infinity Ward. The Map decides what factions fight each other, and what weapons are available to players. Two additional maps (Rostov and Wallendar) were added as part of a free update. Players on Call of Duty PC servers often refrain from using smoke grenades because using them can sometimes cause a server crash. On the Console versions,

Certain maps are marked as 'Unbalanced", these maps are referred to as such because they are designed in such a way that one team is put at a disadvantage, consistently, regardless of whos playing.

* Players could play in a match and on the PC version up to 64 may play at one time. 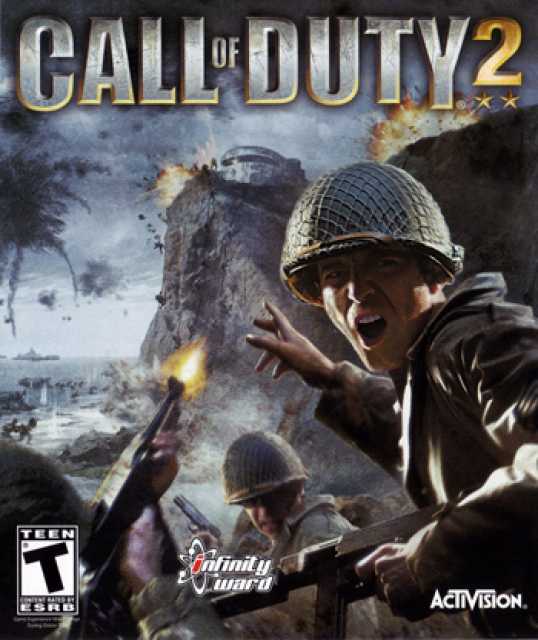