The sequel to the 1990 game Snow Bros.: Nick & Tom, featuring four-player multiplayer and a new cast of playable protagonists (each with unique abilities). It was Toaplan's last game prior to their bankruptcy.

Snow Bros. 2: With New Elves (known in Japan as Otenki Paradise: Snow Bros. 2) is a comedic puzzle-platformer developed and released by Toaplan (under their short-lived "Hanafram" label) for arcades on April 1994.

The sequel to the 1990 game Snow Bros.: Nick & Tom, Snow Bros. 2 features four-player simultaneous multiplayer with a new cast of playable protagonists, each with their own unique attacks: Nick the Snow Kid, Bobby the Thunder Kid, Roy the Rain Kid, and Richard the Wind Kid. Similar to the original, the crew must rescue a princess from captivity.

It is the final game Toaplan released prior to their bankruptcy.

The game plays identical to its predecessor, with one button controlling jumps and another controlling the attacks (which double as "absorption" for Bobby and Richard). The game includes four playable characters, each with their own unique attacks: 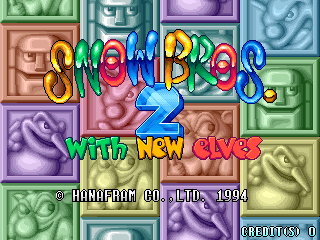