The Ikari Warriors, Paul and Vince, are back in their second installment. Originally an arcade release, the game was later ported to the Nintendo Entertainment System and other platforms.

Victory Road is a significant thematic departure from the original Ikari Warriors game, which had a conventional military theme. In Victory Road the protagonists do battle in an otherworldly dark fantasy realm filled with strange monsters, instead of in jungles populated with soldiers and tanks.

The game also incorporates digitized speech. In the opening scene, a stone-headed creature circles the screen, taunting and laughing at the player in clear English.

Apart from the dramatic change of scenery compared with the original, one of the unusual design choices in Victory Road is that it starts the player off with one of the game's most powerful weapons, a bazooka. In other vertical-scrolling shooters of the era, it was conventional for the player character to start in their weakest form, so having a good starting weapon helped make the first-time experience of playing Victory Road feel different from similar games.

Like its predecessor, Victory Road is a one- or two-player game that uses special joysticks with twistable heads. Twisting the head of the stick changes the direction the player character is facing, which allows players to fire in a direction independent of their direction of movement.

This mechanic also enabled one of Victory Road's original weapons, a sword, which could be used to kill enemies at close range by rotating the joystick. 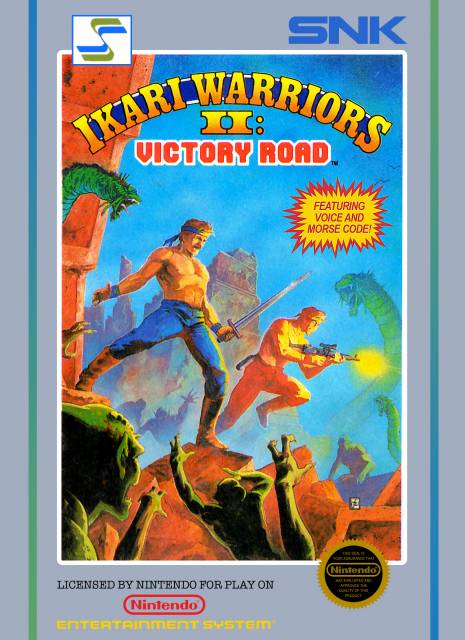