The first entry in the "Tales" RPG series, Tales of Phantasia centers around a group of unwitting time travelers as they try to stop the Evil King Dhaos and reverse the decay of their world.
Game Boy Advance

Tales of Phantasia is a real-time action RPG and the first game in the long-running Tales franchise. One of the bigger games on the Super Famicom, coming in at 48 megabits, Phantasia was an unusually sophisticated Super Famicom game thanks in part to Hiroya Hatsushiba's "Flexible Voice Driver," which allowed extensive (for the time) voice acting and a full pop song opening, Yoshida Yukari's "Yume wa Owaranai," on a home console. Famed manga artist Kōsuke Fujishima's character designs would further cement the series' anime aesthetic. Aside from this, it was also the progenitor of the Linear Motion Battle System and much of the series' staple items, skills, and pantheon of Summon Creatures that continue to be expanded upon. This has caused some confusion much in the way Final Fantasy has with its recurring themes and names, though as of now only Tales of Phantasia: Narikiri Dungeon, Tales of Symphonia, and Tales of Symphonia: Dawn of the New World are known to connect to Phantasia's 'Aselia' timeline.

Phantasia has enjoyed a Tales record of four re-releases. These include an enhanced remake on PlayStation, a hybrid SNES/PSX version on GBA with some added events, and two releases on PSP that upgraded sprite detail, added substantial amounts of voice acting (hence the name "Full-Voice Edition"), and included the GBA exclusive sub-events. The 2nd PSP release, Tales of Phantasia X (pronounced "Cross"), part of Narikiri Dungeon X, refines the formula further. While the GBA version and an anime adaptation are the only ones to be officially localized into English, many fan translation groups have attempted to patch various versions with English text. Most notable of these was DeJap's release of the SFC version in 2001.

100 years ago, four warriors fought and sealed away an Evil King that had been terrorizing humanity. Unaware of this conflict and his family's ties to it, Cless Alvein lives a simple life in the village of Toltus as a hunter of local game and apprentice to his father, Alvein Sword Style Master Miguel Alvein. He sets off on an ordinary hunt alongside his childhood friend, Chester Barklight, but is soon sent racing back by the sound of the village's warning bell. Thunder began to roll as a horrifying sight greeted them: the villagers had all been slaughtered, including Miguel and Maria Alvein and Chester's little sister Ami. His mother's dying words pleaded Cless to flee with the pendant he had been entrusted with before the marauders returned. Though initially only set on revenge against the ones responsible, the two would find themselves thrust into a complex conflict spanning time and space.

Cless Alvein - The prototypical swordsman and first line of defense for the party, Cless is a skilled and resourceful fighter, able to incorporate swords, axes and spears along with shields into his techniques. He is upright and disciplined, often looking out for others, but he can be a little naive. Though not dense by any means, Cless tends to comically fumble his way through dungeons and puzzles. He also has a love of horrible puns and wordplay. When it comes to Dhaos, however, his hatred borders on fanaticism.

Chester Barklight - Chester is the Legolas to Cless's Aragorn, dishing out pain from afar with his trusty bow. Although hotheaded and bitter over his loss, he sees the need to be upbeat when Cless can't be. He doesn't think twice about putting himself in harm's way for his friend, who he feels is far more capable than himself. Chester tries not to sweat the small stuff too much. His aim and drive to improve are second to none.

Mint Adnade - Cless finds Mint trapped in Euclid's prison when he himself is captured by the "Man in Black Armor." He comes to find she's also related to one of the four heroes and was holding a similar pendant before it was stolen. Mint is the healer of the group and a faithful priestess. Her only offensive spells are debuffs and 'Pikohan', strange toy hammers that fall from the sky and stun enemies. Although she's very proper and ladylike, Mint can also be romantic and impulsive when it comes to subjects like love and matchmaking and isn't afraid to express her opinion. She has a love of piano and plays proficiently.

Klarth F. Lester - Cless and Mint meet Klarth 100 years in the past in a substantially quieter Euclid Village. He has been researching ways in which humans could use magic like elves and half-elves do with his partner, Mirald. It's Mirald who finally convinces Klarth to go along with the two without payment, as their goals are basically the same: the party needs magic to combat Dhaos and Klarth needs to travel to form pacts with Summons through the use of rare Pact Rings. He can be selfish and crude at times, but his knowledge, wisdom and Summons make him invaluable. His pinup collection is infamous.

Arche Klaine - Arche is a mischievous half-elf who rides a broom and casts spells that make enemies go boom. Once her identity is revealed, her father Bart of Lone Valley gives her permission to journey with the group and use her magic to take down Dhaos. Arche is bright and cheery and even a little boy crazy, but she shows moments of weakness and frustration when it comes to the poor treatment of half-elves and her missing Elven mother. Her cooking can be fatal.

Suzu Fujibayashi - This little kunoichi (female ninja) hails from the mysterious hidden Ninja Village. Suzu is the granddaughter of the village chief and next in line after her parents. Despite her small stature and young age, she's deadly serious and determined to master Igaguri Ninja Arts. Although she does her best to mask her emotions, she has a bit of a crush on Cless and a monster sweet tooth. She was originally an NPC in the SFC version, but can be recruited in all subsequent releases if her sidequest is completed.

Dhaos - Dhaos is his name, Dhaos Laser is his game. Little is known about his actual motives, but the party nevertheless sets out to stop his evil machinations. He has an odd attachment to the Mana Tree Yggdrasil and its guardian, Martel...

(All names are based on Japanese documentation.)

Battles take place in real-time on a 2D plane that characters can freely move on, much like that of a classic 2D fighting game, except button inputs are limited to whichever button is selected for skills up, down, left or right, or without a direction on the D-Pad for a total of 4 skills or spells that can be set, not counting shortcuts. Using skills or casting spells costs the character TP, or Technical Points, which can be replenished with items, food, sleeping, or slightly when a battle ends. There is a slight exception to this, as there is an item that allows Cless to perform any move without the use of TP if the proper input is performed. This is also how Cless uses Stahn's Satsugeki Bukouken with Stahn's sword, Dymlos.

Also introduced for the first time in the PlayStation version of Phantasia was the Mystic Arte, a desperation move Cless can use if he equips the right Title and holds Guard, Skill and Attack during a combination move when his HP is low enough. Some of the older SFC concepts such as range affecting which skills you could use and Cless being the only playable character were abandoned, but the stopping of time when a spell is performed has pervaded in every release of Phantasia. Combat as a whole is somewhat slower paced than later games in the series, but the core concepts continue to shape the ever progressing LMBS System. 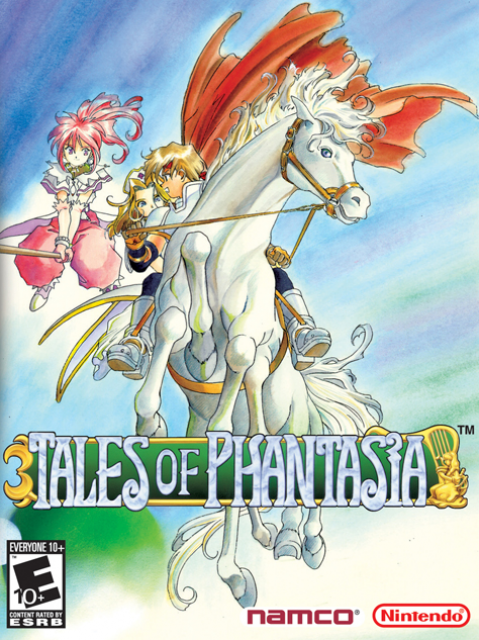