The third installment in the Magna Carta series. It was released exclusively for the Xbox 360 in 2009 by Korean developer Softmax.
Xbox 360

Magna Carta 2 is a role-playing game exclusively for Xbox 360 by Korean developer Softmax that was originally published in Japan on August 6, 2009 by Banpresto. It was originally announced in 2005 but it wasn't until four years later that screenshots were shown and a release date was set in Famitsu's April 2009 issue.

The game features character designs by esteemed Korean artist Hyung-Tae Kim, who also provided the designs for the previous game.

The player takes control of a young man named Juto who suffers from amnesia, hiding a secret power deep within him that the player must unleash to save the world. The game starts with its world in conflict as the Northern and Southern Forces wage war against each other. Juto begins his adventure on Highwind Island, and after the Northern Forces invade, sets out to take revenge after his friend Melissa is killed. Juto joins up with the Southern Forces' Counter Sentinel Unit in a bid to find the man responsible for Melissa's death.

The following characters are all playable in the game:
The game also features guest characters who, while not being under your control, will accompany you during specific quests and assist in battles. Each of the playable characters has two weapon types and skill trees for each.

Magna Carta 2 uses a real-time battle system where you create combos and use your ability to change characters to chain together larger, more powerful combos. You have a stamina meter which fills as you attack, meaning unless you change character, you will overheat and be unable to attack for a short period of time. By timing you character switches carefully, you can negate this effect and chain much longer combos, resulting in larger amounts of damage on enemies and the ability to use a number of special attacks.

Magna Carta 2 beats certain similarities to the plot and characters of Xenogears and seems to be inspired by the game.

Juto, like the main character Fei of Xenogears, is an amnesiac who was taken in by a quiet border town and is attempting to lead his life peacefully.

Juto tends to go berserk with battle rage. When this happens, Juto is capable of great power and the ability to destroy robots with only a wooden sword. This is similar to Fei, who becomes Id in Xenogears, and is able to destroy gears with his bare hands.

The setting of Magna Carta 2 also bears resemblance to Xenogears. Both games begin centered around two nations warring over excavated magical technology. The technology in both games are giant robots, though in Xenogears they are to be piloted by humans and in Magna Carta 2 they are living beings themselves.

The Magna Carta 2 DLC adds three bonus cut scenes, which is accessible through the game's menu screen, and it gives the player the exclusive access to the most powerful weapons in the game. The DLC add on also adds 240 possible achievement points.
Magnacarta 2 Trailer AFRIKA IS HERE SEE IT TO BELIEVE IT Magnacarta 2
The Last Remnant Blue Dragon Resonance of Fate Star Ocean: The Last Hope Infinite Undiscovery Eternal Sonata Enchanted Arms 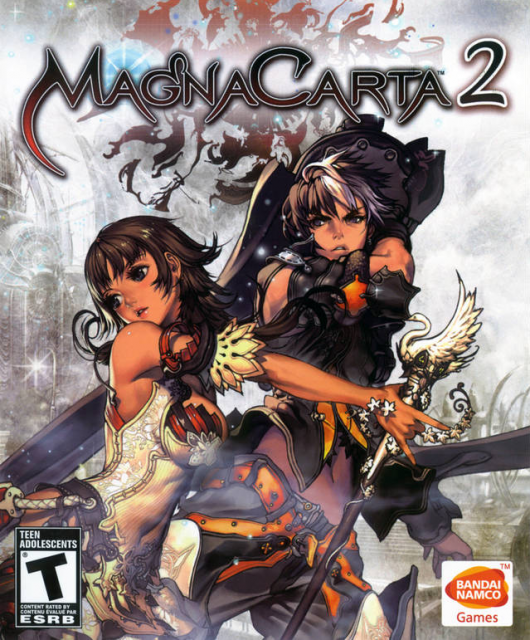