Strider is an arcade action side-scroller, and one of Capcom's first big hits for the Sega Genesis console.

Strider was released in Arcades in 1989, and for the Sega Genesis later on 1990. It was ported to a number of other systems, but these versions are considered far below the arcade and Genesis editions. At the time, Strider seemed like one of the games that made the Genesis so unique, a home experience only to be later surpassed by Sonic the Hedgehog. Strider was one of Capcom's very first big Arcade hits, preceding Street Fighter II. The game was popular because the action was fast, furious, and original. The story sequences in Strider are also notable, as they had voiceovers in eight different languages.

In the year 2048, the world has been devastated by the Grandmaster Meio, an evil man who had watched the Earth from a distant nebula before taking over. He now rules the world with an iron fist from his space station, the Third Moon. On a distant island known as Moralos, the striders, the last defenders of the Earth are training to defeat Meio. Strider, the youngest and strongest of these warriors, is the man who takes up the task.

Strider is a side-scrolling action game, with platforming elements throughout. The player controls Strider Hiryu, who can perform acrobatic jumps, climb up walls, and hang from ceilings. Strider must use his skill set to overcome a variety of obstacles, and progress through the game's five stages. Each stage is littered with enemies looking to stop Strider in his tracks, and Strider has brought along his massive blade to deal with them. The game is relatively simple, using only two buttons along with the directional pad, one button to jump, and one to attack. Most enemies go down in only a few hits, the bosses on each stage being the only exceptions. Strider will have to avoid getting hurt by enemies, as he only begins with three life. He can gain more by collecting life tokens when he has full health.

There are a number of powerups scattered throughout the game, which have a variety of effects. The most basic powerup extends the length of Hiryu's sword. Another powerup will make Hiryu invulnerable for a brief period of time. Some of the more important bonuses include the robots which come to Hiryu's aid. The first of these robots is the Dipodal Saucer, who charges into Strider's enemies. Second is the Terapodal RoboPanther, a large cat robot who follows Hiryu and attacks any enemy in sight. The final upgrade is the Robot Hawk, which, once again, damages any enemies it encounters.

The soldiers in the background of the Genesis box cover are actually shamelessly copied from an earlier version of the Space Marine armor from the tabletop game Warhammer 40,000, complete with the distinct beaked helmet and bolter firearm for one, and the impractical studded shoulder pads for all of them.

Prior to release, Strider was heavily hyped to be the first "8 MEG" (as in, 8 megabits) console game. The front of the box even states "8 MEGA MEMORY." 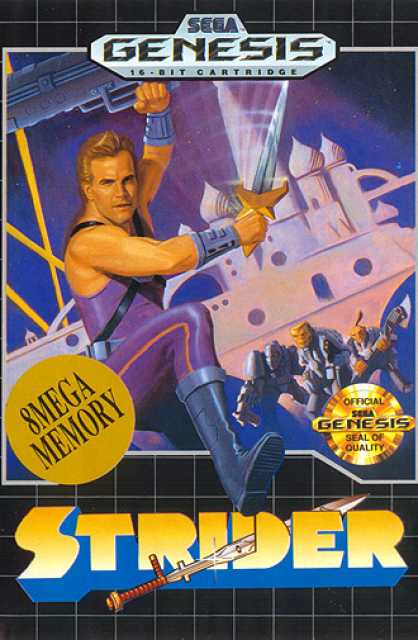