Indigo is a platformer in which players need to collect all the keys on a level within a time limit. The game was originally developed 1991-93, with a planned release in 1993, but was canned in the last minute by Psygnosis. Over 10 years later, in 2005, the game was released for free by the original developers.

Players assume the role of Jack, who loves drawing in a book the adventures of his imaginary friend Indigo. Indigo gets trapped inside the book and Jack must go inside his own worlds in the hope of rescuing his friend.

Indigo was developed by Stéphane Belin, Charley Brewster, Dominique Manfredi and Bertrand Jardel, with music by Mike Clarke and Stéphane Belin. Development started in 1991 and a publishing deal with Psygnosis was signed in December 1992. Shortly before release in 1993, the game was cancelled and fell into obscurity for the next 12 years. The Atari ST and Amiga versions were released for free in 2005.

Indigo is a platformer in which the objective is to reach the end of each level within the time limit. However to open the level exit players have to find all the keys on the level. The keys are all around the levels and some can be found on monsters.

There is a variety of power ups available throughout the game and these include:

The Bombs: Bombs fly down the screen.

The Flash: Zaps all the enemies on screen.

The Droid: A droid follows the player and reveals hidden power ups and bonuses.

The Super Hero: Transforms the player in a super hero who can fly and fire lasers.

The clock. Adds 30 seconds to the time limit. 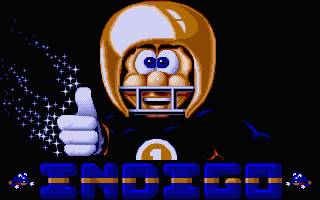