Sequel to Legend of Mir.

The Legend of Mir 2 Four Heroes is an early 2D Isometric MMORPG looking similar in style to Ultima Online. The official European server was shut down, early 2009, but has been relocated elsewhere on an F2P basis. Despite the closed servers The Legend of Mir 2 is still very much alive.

The Legend of Mir 2 consists of four character classes:

A Warrior's strength lies in their ability to fight tough monsters with their high strength and large amount of health. Warriors are able to hunt monsters easily because of their excessive strength and health.

Wizards are favored for their large variety of spells and special effects. Not only does it require extra effort from the mind, but one must be born with these special talents to become a Wizard. Some thought that it is possible to become a Wizard without these special talents born to you, but no one has yet obtained the powers of a Wizard without being born with them.

Through great amounts of mental training and study, Taoists have a masterful knowledge of astrology, geography, and health. Although Taoists may not have the strength of a warrior, Taoists have a variety of sword techniques at their disposal.

Assassins are born for one purpose-total and complete elimination of a chosen target. They use exceptional agility and deadly magical arts to overwhelm foes in the blink of an eye. Assassins learn ageless magical skills through constant study. By mastering these magical skills, the assassins strengthened their magic defense. Additionally, Assassins use their magical skills to hallucinate and weaken monsters.
EverQuest II Myth of Soma Diablo II: Lord of Destruction Ultima Online Astonia 3 Redmoon 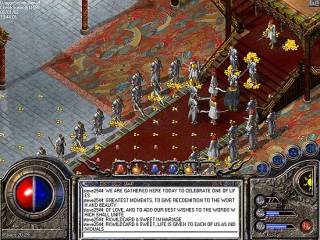