Bear and bird again combine their efforts to thwart Gruntilda's dastardly plans (as well as her two hag sisters and their minions) in this classic platformer for the Nintendo 64.

Two years after the events of Banjo-Kazooie, Grunty was still stuck under the rock with Klungo still pushing it. One stormy night, while Banjo, Kazooie, Bottles, and Mumbo are playing cards in Banjo's House, a giant drill machine known as the Hag 1 drills out of a wall into Spiral Mountain. The rumbling of the machines caused Banjo and company to become worried. Unbeknownst to them, two witch sisters arrive and easily move the boulder that Gruntilda was trapped under in the last game. They send Mumbo out into the stormy night. He walks over to a nearby bush and sees Gruntilda She is no longer just an ugly witch, but a bony and uglier witch. After casting a bony eye on Spiral Mountain, she spies Mumbo and runs after him, magic blazing. He warns the others, who escape, but Bottles decides it's a trick, and gets caught in a blast. Banjo's house is destroyed, Bottles is dead, and the world is at risk. Grunty and her sisters then retreat to the Cauldron Keep in the Hag 1 drilling machine, scattering all of the jinjo families in the process.

Banjo and Kazooie survey the wreckage, then decide it's time for another adventure. Along the way, they encounter many challenges, fearsome enemies, and a witch that is out for revenge. Nothing that a bear and a bird can't handle.

Banjo-Tooie's gameplay is similar in concept to its predecessor, Banjo-Kazooie. The player must explore the hub world (Isle O' Hags) and enter nine large non-linear levels, each containing Jiggies which allow further access to the Isle. The core goal of the game is the same as the first, to collect as many jiggies as possible. There are a wide variety of puzzles, games, platforming and adventures that will net jiggies. Collecting them will afford access to new levels. All in all there are 90, with the player often needing to revisit levels with new moves in order to collect them. There are also other collectibles, such as musical notes and jinjos. The levels available run the gamut, from an ancient civilization to an underwear factory.

Once again unlocking levels requires completing puzzles; however, this time the pictures are all based in one fixed point, Jiggywiggy's Temple. Also returning from the previous game is the ability to transform, allowing access to different areas, as well as the ability to learn new moves. Banjo and Kazooie start out with all the abilities they learned in the previous game. This is in contrast to the common "lose moves" scenario that some sequels take. They are able to jump, flip, swim, attack, and even fly (with the help of flying pads). They can also learn new moves from Bottles' brother Jamjars. However, this process has been altered from the previous installment. Whereas in Banjo-Kazooie, new moves had been free to learn whenever the player had located Bottles' Molehill, the new instructor Jamjars requires Musical Notes to learn new abilities. One of these new moves is the Split Up, which allows Banjo and Kazooie to, as the name suggests, go their separate ways and explore on their own. When doing so, the characters have different characteristics and new abilities. Kazooie is fast, can fly and hatch eggs but has one honeycomb health less than Banjo, whereas Banjo is slower, but has more health and can perform different abilities with his backpack. Another new staple is the addition of Mumbo Jumbo as a playable character. Mumbo can perform spells which can lead to a Jiggy or aid gameplay.

The game is also groundbreaking in several areas, the biggest of these being level design and connection. Platformers before it typically had their levels linked only by a single hub world or overworld. In Banjo-Tooie however, most of the levels are interconnected in various ways. While there is still a hub world, players are able to cross between worlds themsevs, such as between Glitter Gulch Mine and Jolly Roger's Lagoon via water pipes, or between Terrydactyland and Witchyworld to grab some hamburgers. For certain jiggies cross travel is required. The biggest implementation of this is the train stations. There are train stations in most of the levels, which allow the player to hop on the train in one level, and choose which level to get off at (providing the player has found the station in that level first).

There are a variety of things outside the single player adventure that are unlocked as it progresses.

Multiplayer consists of all the various mini-games that are played throughout the game, such as the Mayahem Kickball Tournament. Games such as the Ordnance Shootout and Chomper's Belly put the player in First-Person, with Kazooie acting as a gun (and firing eggs) to either kill players or hit targets. Other games play as they would normally, with human players in for computers.

The game records all of the mini-games, boss battles, and cutscenes that the player has gone through. They can then replay any of these standalone items at any time.

The following is a complete list of the moves that the duo will learn with Jamjars (Bottles' brother) throughout the course of the game, aas well as their locations:

Returning from the original game, Banjo and Kazooie can transform into different creatures or objects by visiting Humba Wumba. While in Banjo-Kazooie only a few stages featured transformations on Banjo-Tooie all of the worlds have their own specific transformations. They are listed below, including the location where it happens and a brief description.

Unlike, the previous game, the once fabled Stop and Swop items are now just plain old items that unlock secret moves and abilities. Originally, these items were going to be obtained by learning secret passwords in Banjo-Tooie which would reveal the items when entered in Banjo-Kazooie. The items would then be transfered back to Banjo-Tooie by way of "hot swapping" the cartridges. The N64 would hold on to a small amount of data if the player pulled the cartridge out while the system was on, and that was how Rare planned to transfer the items. However, in later models of the system, the data was cleared out of memory much quicker, making the window of time to swap the cartridges extremely brief. This eventually caused Rare to scrap the whole concept in favor of just adding them as collectibles in Banjo-Tooie. Hackers who explored Banjo-Kazooie's code found the passwords that Rare planned to reveal in Banjo-Tooie, which only served to confuse players who tried to find a way to use the mysterious items.

Two of the "secret" Stop N Swop eggs can be found in Spiral Mountain hidden inside Banjo Kazooie game packs. Striking them will spit out the egg. Taking these eggs to the Egg Shed in Wooded Hollow will unlock secrets in the game. The yellow egg is already in the shed, but must be hatched by Kazooie.

Above the stump that contains the boots in Spiral Mountain is a metal grate. Fly up there and shoot a grenade egg to bust open the grate. Fly in there and smash the pack to get the egg. This egg unlocks the ability to swing Kazooie as a club.

Fly to the top of the waterfall in Spiral Mountain and enter the top. Using the grenade eggs, smash the metal grate and do the same thing to get the Blue Egg. This will unlock the ability to have Kazooie's eggs home at enemies.

Once the duo have learned the Hatch ability from Terrydactyland, go to Heggy's Egg Shed in Wooded Hollow and drill the rubble covering the split up pads. Split up and take Kazooie up to the top floor, where the yellow egg is waiting in a nest. Hatch it, and the player will get the ability to select Jinjo in multiplayer games.

In the "sandy" part of Jinjo Village, there should be a part where Banjo can shimmy on the side of the ledge. Climb that to enter a cave which has another pack in it. Smash it to get the Ice Key. After gaining the Talon Torpedo ability, go to Glitter Gulch Mine, through the Water Storage area to the Waterfall Cavern, and use the Talon Torpedo to get to the ice side of Hailfire Peaks. Use the Ice Key to unlock the Ice Safe and to obtain the Mega-Glowbo. Give that to Humba Wumba in Pine Grove to transform into Dragon Kazooie.

In contrast to Banjo-Kazooie, Tooie is much darker in tone and material. Whereas Kazooie featured light-hearted music, bright and colorful levels, and an overall sense of cheeriness, Tooie is much darker in all aspects. This is apparent right off the bat, when Bottles is killed off. The levels are on the whole darker and dingier than the ones in Kazooie. The music also follows suit, feeling dark and foreboding in most of the games levels. It slows down to a creeping dirge in the darkest recesses of the world. The humor of the game often takes a sarcastic tone, with Kazooie cracking jokes about other characters incessantly.

Banjo-Tooie features many return appearances from characters and things first found in Banjo-Kazooie. This includes major characters such as Mumbo Jumbo, and minor ones such as Conga and Gobi. Levels from the first game are also alluded to in various ways. Rare also references games from their stable. Instances of this include Jet Force Gemini posters in Bottles' kids rooms, and an appearance by Sabreman, from their earlier game, Sabre Wulf. There are even references to other works. In the Grunty Industries level, Kazooie refers to Nintendo's Mario (and his plumber roots) by suggesting to Loggo that "maybe Mario could unclog him", to which Loggo replies that he "doesn't think Mario does that kind of work anymore". There is also a reference to E.T., as Kazooie once asks the aliens in Hailfire Peaks if "they need to phone home". Lastly, both Banjo-Kazooie and Tooie are referred to in later Rare games, most notably Viva Pinata.

Banjo-Tooie was widely praised by reviewers and is considered by many to be one of the best platforming games to be released. It is a gem of the Nintendo 64 era. The game has gorgeous visuals and it may be regarded as the best looking game on the system even though it didn’t make use of the expansion pack.

Banjo-Tooie was released on Xbox Live Arcade on April 29th, 2009 for 1200($15) Microsoft Points. The port, developed by 4J studios, resurrects the Stop n Swop features for use between Banjo-Kazooie on XBLA and Banjo-Kazooie: Nuts and Bolts. Additionally, the graphics are much more crisp than on the original. 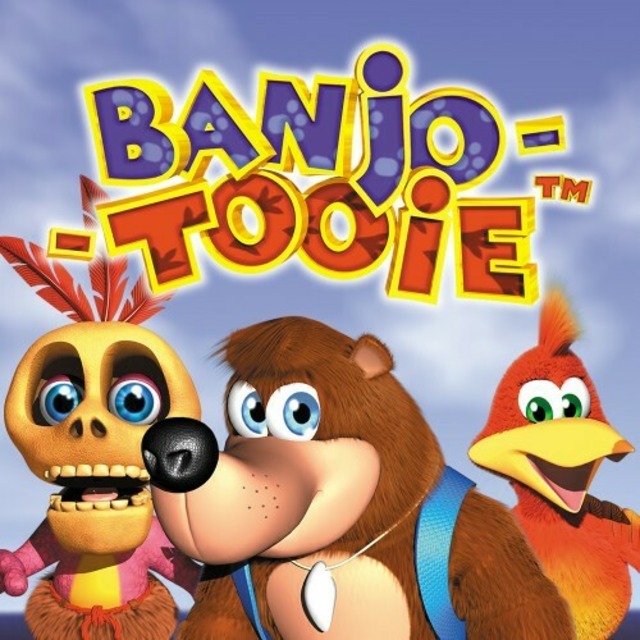