Announced via a trailer on Spike TV's GameTrailers TV, Vanquish was developed by PlatinumGames. Shinji Mikami, creator of Resident Evil and God Hand, directed the game, while Atsushi Inaba worked on production. The game was released on October 19 in North America, October 21 in Japan and October 22 in Europe for Xbox 360 and PlayStation 3. A demo was released on Xbox Live and Playstation Network early in September.

The game was unveiled at Tokyo Game Show. It does not feature any co-operative or competitive multiplayer modes.

The game was innovative in several ways, much like Resident Evil 4 before it. It improved upon the cover system, where in contrast to previous cover-based shooters, the cover in Vanquish is easily destructible. The game also penalizes the player's ranking for the number of times they have taken cover, though its most important innovation is the power-slide mechanic that allows the player to slide into and out of cover at high speeds, or in bullet time.

The gameplay in Vanquish resembles closely that of Gears of War 2 from a mechanical standpoint. Where it differs is that it runs at a much faster pace, everything players can do in Gears they can do in Vanquish, but at about 100 times the speed. The Augmented Reaction Suit (ARS) offers three main abilities to aid players in taking down enemies, these are as follows:

Sam carries the Battlefield Logic ADaptable Electronic (BLADE) Weapons System that is capable of duplicating any weapon found on the battlefield. Players can hold three weapons at any time in Vanquish along with the two grenade types, explosive and EMP. Grenades instantly detonate when thrown while power sliding. Every weapon can be upgraded, by collecting an upgrade chip that will instantly upgrade whatever weapon is currently equipped. The other way to upgrade weapons is to collect weapons players have when they have full ammo for them, this method is the only way to upgrade grenades. Below is a list of the weapons found in the game.

For pre-ordering the game players gained access to an exclusive pack of three weapons which were later made available for download for 160 Microsoft Points. The three weapons are:

Vanquish is set on far-future Earth where its populations has reached critical levels, creating a shortage of resources and real estate. To solve this problem, United States of America has launched SC-01 Providence, a self-sustaining space station that harnesses solar energy and is capable of supporting millions of people inside a fully functional eco-system. Meanwhile, Victor Zaitsev of the Order of the Russian Star leads a coup in Russia. His first act as their new leader is to promptly declare war on USA by capturing Providence and turning its solar generators into a giant death ray. He destroys San Francisco with the warning shot, threatening to destroy New York next unless the USA surrenders unconditionally.

America responds by sending Sam Gideon, a DARPA agent and the game's protagonist with a battalion of US marines, led by Robert Burns, to take back the station and stop Victor. Sam is also entrusted with a secret mission to rescue the scientist responsible for the space-station, Dr. Francois Candide and help him disable the death ray before it could be used again. The storyline is treated with a playful tone, often satirizing the events of other popular sci-fi shooters and delving into cliches from an ironic point of view.

Vanquish was the result of the poorly received game called God Hand that was created by the now defunct Clover Studio. Although it was considered to be a cult classic by many, God Hand did not sell well and Mikami believed that it was because he had too much creative freedom. As a result, he decided to make a game that will appeal to a wider audience by making a mainstream action game. This attempt at broader appeal is partially evident in the fact that English is the lead language on Vanquish, even though the developers fully acknowledge the fact that many of their fans have "a preset bias towards the Japanese language track for whatever reason."

The game is confirmed by Mikami to be a spiritual successor to P.N.03, a stylish sci-fi action game that received lukewarm reviews. Mikami said the reason P.N.03 was considered inferior was because of time constraints from Capcom and he couldn't design the gunplay the way he originally intended to. He added by saying that one of the reasons he loves partnering with Sega (publisher of Vanquish) is due to to the freedom the Sega gives him. The result of Platinum's departure from Capcom and relationship with Sega can be seen in Vanquish. The graphics of Vanquish were partially inspired by the Casshern animated television series.

A playable demo was released for Vanquish on August 31st in North America and September 2nd in Japan and Europe for both the Xbox 360 and Playstation 3. The demo puts the player in the shoes of Sam Gideon and his suit as the American troops battle Russian forces in Act 1, Scene 3 of the full game, and ends with a boss battle against a large, transforming, prototype mech called the Argus.

Vanquish was widely acclaimed by critics, with many reviewers praising the game's visuals, gameplay, innovation, fast pace, and over-the-top style, though some also criticized its short length, lack of multiplayer, mediocre plot, and corny dialogue.

Vanquish has received Game of the Year awards from the Classic Game Room, Zavvi, and TGN Times. X360 gave it the "Best Shooter" award, and GamesRadar gave it an award for Most "Oh Shit" Moments Per Minute. IGN gave it the "Best Sci-Fi Game" award. GameSpot gave the game the awards for "Best Game No One Played" and "Best Original Game Mechanic" for its rocket-sliding game mechanic, which acts as both a defensive escape and an offensive setup, opening up new gameplay possibilities for action games.

The game has set a new trend, with its influence seen in recent shooter games that have incorporated similar sliding-boost mechanics. Some of the games that appear to have incorporated similar mechanics include first-person shooters such as Bulletstorm, Crysis 2, Killzone 3, and Titanfall, and third-person shooters such as Gunslinger Stratos and Sega's own Binary Domain. 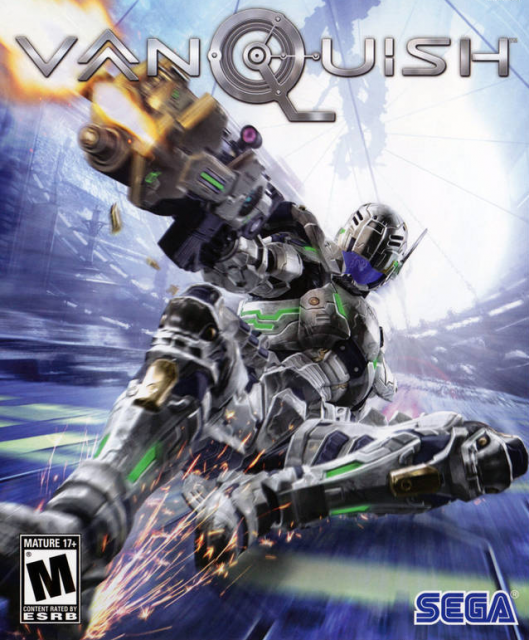