Dudebro™ — My Shit Is Fucked Up So I Got to Shoot/Slice You II: It’s Straight-Up Dawg Time

As the legendarily manly John Dudebro and his plucky sidekick Habemus Chicken, players must fight the sinister forces of the SkullPro Army, lead by Armando Pesquali and Commander Limpwrist, in this comedic dual-joystick shooter designed by members of the NeoGAF online community.

Dudebro™ II is an 8-bit, side-scrolling 2D shooter being built by a team of over 100 volunteers. The lead character, John Dudebro™, will be voiced by Jon St. John, perhaps best known to players as the voice of Duke Nukem. The original title (and therefore the underlying concept) for the game came about on a gaming message board thread on the NeoGAF forum in which one user called cuyahoga, in defense of his interest in the Ubisoft DS title Imagine: Babyz Fashion in the face of ridicule, declared:

So, I'm a pedophile because I don't want to play Dudebro, My Shit is Fucked Up So I Got to Shoot/Slice You II: It's Straight-Up Dawg Time? To throw around these sort of accusations at someone who seeks to do something different suggests quite the insecurity on your part.

This comment was effective in that it promptly derailed the thread, changing the subject away from taunting a user for their interests and towards the improvised game title and the ideas it represented. Additional information on the origins of the title may be found in the official thread. The first trailer and the official website was released during E3 2010.

Dudebro II was announced as a 2010 title but has been delayed due to many volunteers leaving the development team. On February 17th, 2011, Grimoire Assembly Forge (the development team of NeoGAF members behind the game) announced that development had shifted from the use of 3D character models to 2D sprite artwork. 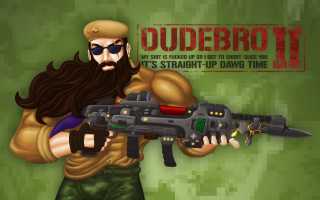