Nathan "Rad" Spencer returns with the ability to jump and a snazzy moustache, in order to face an evil general bent on launching a missile strike.
Xbox 360 Games Store PlayStation Network (PS3)

Bionic Commando Rearmed 2 closely follows the structure set by its predecessor. Players are required to navigate levels, usually vertical in nature, by grabbing, climbing, and swinging on the environment using their bionic arm. Different types of enemy soldiers and robots are also a threat scattered throughout each level. Enemies can be dispatched with a variety of weapons or bionic arm abilities, both old and new. There are also boss levels, containing large, pattern-based foes to eliminate using special techniques.

New to Rearmed 2 is the ability to jump, which is fairly weak in height but allows Spencer to grab slightly out-of-reach platforms, cross small gaps, or vault over short obstacles. This can be used to activate a new Death From Above attack, inherited from the 2009 Bionic Commando release, where Spencer slams the ground below, damaging enemies and breaking away certain objects in the impact radius. Jumping is not required to complete the game and an unlocked difficulty even disables it entirely. Reamed 2 also features a new swinging mechanic. Rather than requiring momentum to begin swinging or holding in the direction they would like to dismount a swing, swinging is entirely controlled by the player. Detaching the claw is now triggered by an additional button press. Swinging motion and extend length of the arm is now determined by the player's movements, even while hanging. Another new ability, called Bionic Vision, can be used to scan the surrounding area for hints or information. Occasionally the action is broken up by giving control of mounted sniper rifles or helicopter guns in on-rails shooting sections.

New weapons and bionic arm abilities have been added that can be changed on the fly. Weapons come in a variety of types, ranging from small arms to bazookas. The player can also equip one of several Passive and Active bionic arm upgrades. Active upgrades deplete a portion of a power bar when used that recharges over time. Secret areas are abundant in each level and hide upgrades or collectibles. Often times, these secret areas require an ability the player gains later in the game to access, encouraging previous level replays. Upgrades give the player new weapons/abilities or improve the performance of those already obtained. Each level also has a hidden extra life power-up, which increases the number of deaths the player can expend upon entering a new level, and also a hidden Yashichi, which awards an achievement/trophy when all are collected.

Challenge Room make a return but are toned down in difficulty compared to Rearmed 1. Instead of encouraging abusing the game mechanics, challenges are now purely based on grappling, swinging, and jumping skill. Each challenge grades the player based on their time and has leaderboard support, just as the campaign levels do.

Cooperative play also returns, although it is local-only. Two players can work together to get through the single player levels, each with their own stock of lives, health, and power bar. Each player can equip individual weapons and upgrades separately. Players are tethered to one screen and if one player falls behind, a 5-second countdown will begin before killing them. If death occurs, a short respawn timer appears before allowing the player to spawn nearby their ally. If both players are dead at the same time, they will be reset to a checkpoint.

Rearmed 2 features an inventory screen that can be accessed at any time during gameplay. Here the player can choose their weapon, passive ability, and active ability, as well as see the description and number of upgrades for each.

Finishing the game without jumping awards the Billy Hoyle achievement, a reference to Woody Harrelson's character in the movie White Men Can't Jump. 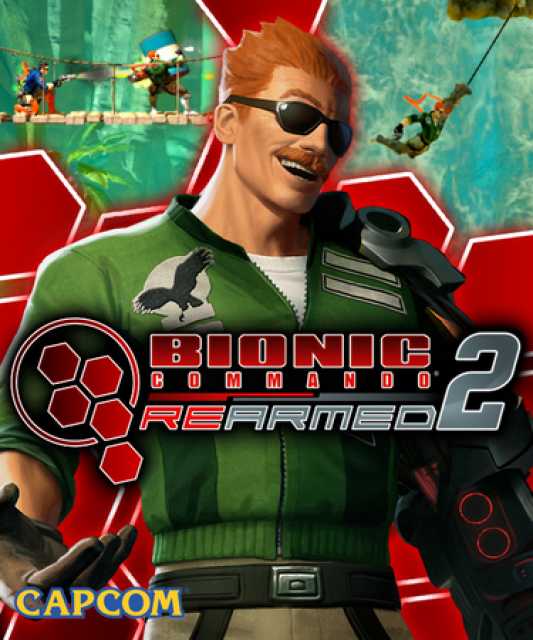