Hydorah is a horizontal space shooter made by indie developer Locomalito.

Hydorah is a freeware indie shoot-em-up with gameplay similar to Gradius and R-Type. There are sixteen levels with branching paths and multiple endings.

At the beginning of the game, the ship has a default forward firing railgun and missiles which requires ammunition to fire. After beating a stage, a new weapon will usually be granted. Weapon loadouts can be freely selected and swapped around between stages. Eventually, there will be fifteen weapons to choose from: Five main gun types, five subweapons, and five power weapons. Generally, main weapons are forward firing and subweapons are bombs that are launched above and below the ship. Weapons in the power slot require ammunition and consist of things like temporary invincibility and screen-clearing bombs..

Many of the weapons which can be obtained are close approximations of weapons in the Gradius series: The Laser, Twin Missile, and Option are all represented here, among others.

There are two main power-up types: Green/Red and Yellow/Blue. The color of the power-up determines what is received: Green powers up the main gun, while red powers up the subweapons. Yellow provides ammunition for the weapon in the power slot and blue increases the speed of your ship. After appearing as one color, they will switch colors after a few seconds.

All songs are made by Gryzor87, except 'Shinobi Stage 1' and 'Game Over' by Sega. 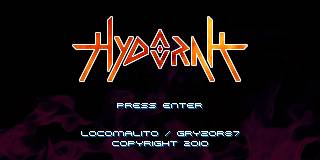