Rough and tough clay warriors return a third time to beat each other senseless on the Nintendo 64. Also, Earthworm Jim and Boogerman!

ClayFighter 63⅓ is a 2.5D fighting game developed and published by Interplay for the Nintendo 64 on October 27, 1997.

Along with several characters from the first two installments, the game introduces four new characters: Kung Pow (a chef and offensive Asian stereotype), Houngan (an evil witch doctor), Sumo Santa (a clone of Santa Claus who happens to be a sumo wrestler), and Dr. Kiln (a mad scientist and the game's main villain). Two other Interplay characters, Earthworm Jim and Boogerman, guest star as playable fighters.

The original game was planned to be a launch title for the unreleased Panasonic M2 console, and was also planned to be released on the Sony PlayStation. An enhanced version of the finished game, titled ClayFighter: Sculptor's Cut, was released on May 15, 1998 as a rental-only exclusive for Blockbuster Video shops. Along with a simplified combo system, new storylines, and other minor changes, this version adds four additional characters that was originally scrapped. The game's very limited distribution (only available through rentals and an online contest) makes it one of the rarest Nintendo 64 games of all time.

The game includes 12 playable characters, three of which must be unlocked beforehand.

Five other characters were scrapped for this game's release, and four of them (High Five, Lady Liberty, Lockjaw Pooch, and Zappa Yow Yow Boyz) were later included in ClayFighter: Sculptor's Cut. The fifth scrapped fighter, an alcoholic homeless vigilante named HoboCop, was denied for inclusion by Nintendo. 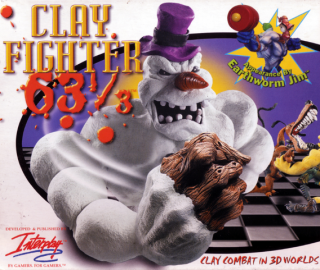