The second installment of id Software's Quake series of fast-paced first-person shooters abandons the original's Lovecraftian theme for a hard sci-fi aesthetic. A lone space marine must infiltrate the homeworld of a hostile bio-mechanical race known as the Strogg and prevent them from invading Earth.

Quake II is a sci-fi horror first-person shooter developed by id and published by Activision for Windows PCs on December 9, 1997.

The sequel to the 1996 game Quake, Quake II foregoes the Lovecraftian story and atmosphere in favor of a hard sci-fi aesthetic (while still retaining some of its grit). It was originally planned to be an entirely unique IP, although its gameplay similarities allowed it to stick with the "Quake" name. Along with being more mission-based (with different types of objectives), the game includes seamless levels that allow players to travel back-and-forth between them (which are required to complete certain objectives). It also includes a harder industrial-metal CD soundtrack, most of which are from the musician Sonic Mayhem (who previously did an alternate soundtrack for Quake).

The game's main campaign is set on the planet Stroggos, homeworld of the hostile bio-mechanical race known as the Strogg. In a desparate attempt to prevent the Strogg from invading Earth, the Terran Coalition of Man (TCM) stages a counter-attack against Stroggos known as "Operation Alien Overlord". Players take control of a lone marine (later known as "Bitterman"), whose drop pod crash-lands away from the staging area due to an E.M.P. blast from the Stroggos planetary defense system (or "Big Gun"). As the last remaining survivor, the marine must single-handedly destroy their way from teleporting to Earth and then eliminate their leader (codenamed "Makron").

The game's expands on the 3D game engine used in Quake, featuring additional out-of-the-box support for hardware-accelerated 3D graphics (via OpenGL) and new rendering effects (such as different-colored lighting). The game engine, later known as id Tech 2, also revamps the modularity of the game logic by having it use module DLLs instead of using QuakeC. Along with several fan-made mods, the game's engine was used for several third-party games, including Heretic II, SiN, Kingpin: Life of Crime, Soldier of Fortune, Daikatana, and Anachronox. Its complete source code was later released as open source on December 22 2001 under the GNU General Public License, allowing for expanded source ports.

Along with two licensed "mission packs" (The Reckoning by Xatrix and Ground Zero by Rogue), the game received two official console ports (a Nintendo 64 version by Raster Productions and a Sony PlayStation version by HammerHead), multiple third-party computer ports (for Mac OS, Linux, and the Amiga), and an obscure port for the Zeebo. Other releases include Quake II Netpack I: Extremities (which include fan-made mods and levels), Quake II: Quad Damage (which include the game, both Mission Packs, and the Netpack), Quake II: Colossus (a Linux compilation including the game and both Mission Packs), and Ultimate Quake (which include the original Quake trilogy). An enhanced port of the game was included in the Xbox 360 version of Quake 4 as a bonus disc. The game, as well as its expansions, were digitally released by id via Steam on August 3, 2007 (albeit without the original soundtrack).

The game also received multiple sequels, starting with Quake III Arena. While the direct sequel switches the aesthetic yet again, Quake II's story was expanded in both Quake 4 and the spin-off Enemy Territory: Quake Wars.

Quake II is a fast-paced first-person shooter game similar to it predecessor. Some of the weapons from the original Quake make an appearance in Quake II (Shotgun, Super Shotgun, Grenade Launcher, and Rocket Launcher) along with many new weapons (Blaster, Machine Gun, Chain Gun, Railgun, Hyperblaster, and BFG10K).

The game does include a few scripted events such as enemies running away from an imminent air strike, but these mostly consist of monster closets. The area for each mission is very large and has several sections, the game loads whenever the player reaches a different section of the area. Sections are identified by two doors in close proximity to each other, the player enters the first door and before entering the second the game loads. In addition, each section has its own separate statistics for secrets, enemies, goals, etc.

Unlike id's previous first-person shooters, which had players progressing from level to level (with the game sometimes split into multiple "episodes"), Quake II has the game split into multiple groups of seamless levels. This system allows players to traverse back-and-forth between levels at different points, which is sometimes required to complete objectives. The included campaign is split into the following:

The first series of levels is set in a military base, in which players must reach its communication systems and establish a link to the player's command ship.

The second series of levels is set in a warehouse, in which players must shut down a vital supply transport.

The third series of levels is set in a security complex, in which players must shut down the computer controlling the region's security grid.

The fourth series of levels is set in nearby mines, in which players must traverse in order to reach the Strogg production facility.

The fifth series of levels is set in the facility that produces new Strogg from the marine's fallen allies. Players must traverse the facility and shut it down.

The sixth series of levels is set in a power plant close to the planetary defense system. Players must disrupt the enemy defenses by overloading its reactor (after shutting down both the coolant and waste disposal systems).

The seventh series of levels is set inside the planetary defense system itself (known as the "Big Gun"). Players must disable it to allow the TCM to call in an air strike and demolish it.

The ninth series of levels is set inside the Makron's heavily-guarded palace. As they make their way to the Makron, they must disable the communication laser that allows the Makron to communicate with its distant armies.

In the tenth and final series of levels, the players make their way to the Makron's inner sanctum and must pursue the Strogg leader to the final confrontation.

Like Doom and Quake, Quake II can be played in networked multiplayer both co-operatively (with players teaming up to take on the main campaign) and competitively (in arenas suited for deathmatches).

The studio later released three additional maps that were intended for 64-player servers, all in a single separate download:

In addition, the following map was released as a separate download:

The mode includes a bonus utility weapon, known as the Grapple, which serves as a grappling hook that allows new mobility options. It also adds four unique "tech" power-ups, which serve as a player upgrade:

Only one Tech power-up can be equipped per player, and can be dropped for other players using a dedicated command.

The first included version, known as CTF 1.02, includes the following batch of levels:

In addition, the following map was released as a separate download:

Perhaps the most noteworthy of Q2's mod legacy is Action Quake 2 (AQ2) which implemented a realistic setting and modern day weaponry, it also introduced bleeding and the ability to cripple enemies so that they need to bandage themselves.

Some AQ2 developers later went on to develop Counter-Strike for Half-Life.

Returning from the original Quake, Rocket Arena 2 (RA2) is a mod which pits players against each other in a round based game mode with all weapons and full armor, there are no item pickups.

The soundtrack for Quake II was composed mostly by German producer Sonic Mayhem (aka Sascha "Buzzfunk" Dikiciyan) with additional tracks by Bill Brown.

It is recommended to use a source port when playing Q2 on modern hardware and operating systems.

Note: In order to play the single player component, you will need the "pak0" file from the original Q2. 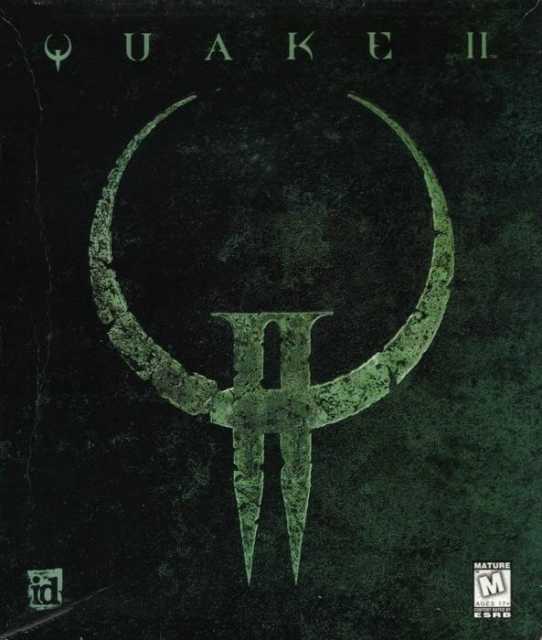