Between Afghanistan and China, the world’s next flashpoint is about to erupt.

Operation Flashpoint: Red River takes place in the not too distant future in the real location of Tajikistan, close to China, Afghanistan, and Pakistan. Afghan insurgents make their way into the country with US forces trying to control the situation, while at the same time the Chinese People's Liberation Army, fearing a US breach into the country's soil, also gets involved.

The story of the game is told from the perspective of Bravo Squad, and the soldiers that make up the squad use colorful language throughout, most noticeably between deployments while riding in the Humvee listening to an assortment of popular Metal music.

During the single player campaign or the 4 player drop-in drop-out coop campaign you can play as 4 different :

Experience points will be persistent between and multiplayer. These points allow the player to select different perks and skills between missions. These perks and skills, however, add to weapon stability and running speed/duration, rather than any unrealistic perks in games such as the recent Call of Duty franchise entries.

During mission intervals, you can also edit and change your weapons, adding attachments, changing equipment and adding "Soldier Perks" to increase things like XP gained and increased healing ability.

There are 4 mutliplayer modes in Red River: 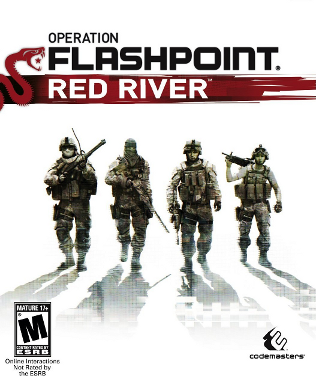