As the secret agent "Albatross", infiltrate the terrorist organization GELDRA to rescue your partner in this arcade side-scrolling run-and-gun platformer by Namco.

Rolling Thunder is an espionage-themed side-scrolling platformer-shooter developed by Namco for arcades, with a release in Japan by Namco on December 1986, a release in North America by Atari on January 1987, and a release in Europe by Namco on February 1987.

One of the earliest action platformers of this type, Rolling Thunder tasks players with infiltrating the lair of the terrorist organization "GELDRA" as a secret agent of the World Central Police Organization (or WCPO), known only by the code-name "Albatross", in order to rescue his partner Leila from the GELDRA leader "Maboo". Armed with both a pistol and sub-machine gun, Albatross must fight hordes of masked goons and mutants to reach the end of each stage. There are five stages in total, which must be completed twice (once in a higher difficulty, resembling GELDRA's "true" headquarters) to complete the mission.

While it is not the first platformer-shooter of its type, it influenced the genre with several new gameplay mechanics, including the use of limited ammunition (which can be replenished by entering certain doors), a rudimentary cover-based system (as Albatross can crouch and hide behind cover), and the ability to perform a special jump in order to reach a higher set of platforms (similar to the earlier game Shao-Lin's Road and the later game Shinobi). It received two sequels: Rolling Thunder 2 and Rolling Thunder 3.

The game later received computer ports for the Amiga, Atari ST, Amstrad CPC, Commodore 64, and ZX Spectrum, all of which were developed by Tiertex and published by U.S. Gold in Europe in 1988. It later received an official port by Arc Co. for the Nintendo Entertainment System in 1989 with two releases: one in Japan (published by Namco under their "Namcot" brand on March) and one in North America (published by Tengen on October). The NES version was later included in the Namcot Collection / Namco Museum Archives Volume 2 compilation for the Xbox One, PlayStation 4, Nintendo Switch, and PC.

The player must help Albatross make his way through various GELDRA bases in search of clues to the location of their HQ and to rescue Leila. To do so, the player guiding him will need quick reflexes. Albatross is armed with a pistol which can be shot rapidly; if the player should run out of ammo, the last bullet will regenerate over time, but this seriously impedes the player's rate of fire. Albatross is capable of touching an enemy twice before dying, or being shot/hit by a grenade/burned with flames/etc. a single time before losing a life.

In many stages there are two or more "levels" (a ground floor and a catwalk of some sort) that the player can stand on; the player can switch between them by either hitting up and jump or down and jump. Sometimes there are objects (or not, as the issue is generally a lack of a hand rail) which will prevent the player from dropping down from the upper level. In addition, doors are spaced throughout all stages. These doors serve three purposes: Firstly, they are a point of entry for GELDRA agents, termed "maskers". Secondly, they are a place for Albatross to hide from the maskers. Be careful though, as if a masker sees you enter, he won't be afraid to simply stand in front of the door! Thirdly some doors are labeled "ammo" or "arms". The "arms" doors temporarily grant Albatross the ability to use a machine gun. When the ammo runs out, Albatross returns to using his normal pistol. The "ammo" doors simply contain extra ammo for Albatross' pistol. At the end of each stage, the player is treated to a cutscene of maskers watching other maskers harassing Leila via a massive monitor, either stripping her of clothing, electrocuting her, or performing some other diabolical and villainous deed.

The main protagonist. He belongs to "Rolling Thunder", a group of the best agents in the WCPO. His favourite gun is a "Walther P-38". His design is apparently loosely inspired by Lupin III. He returns in Rolling Thunder 2.

A fellow member of Rolling Thunder and Albatross' partner, she was caught while on duty by GELDRA. The object of the game is to rescue her. She returns as a playable character in Rolling Thunder 2.

The evil leader and founder of the GELDRA organization. He is determined to conquer the world, and doesn't even appear to be human. He is capable of firing energy projectiles from his hands.

The foot soldiers of the GELDRA organization. They come in a great variety of colors, which generally are an indicator of how they attack and react to the player. Some, termed "ninjas", are equipped with special stealth suits; others which wear goggles and have rounded hoods are generally sturdier than your basic masker.

There are several stage types in Rolling Thunder; the player passes through two sets of stages termed "story 1" and "story 2", culminating in the second secret lab which is GELDRA's true headquarters.

The first stage in both story 1 and 2 are of this variety. It is characterized by a blue background and containers.

Resembling a cave, there are often panthers or mutant bats called gelzo found in these.

Secret GELDRA bases hidden around the world. These resemble labs, and are generally swarming with maskers. 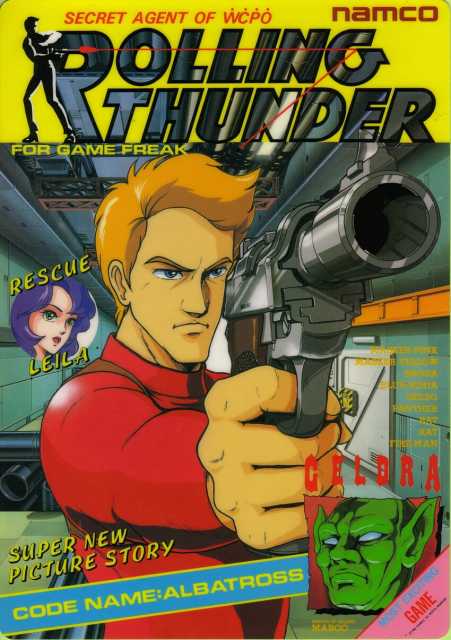