Ascend from a billionaire playboy to a feared superhero in the third-person adventure game tie-in to the 2005 feature film of the same name. It is the only game to be based on The Dark Knight Trilogy.
Game Boy Advance PlayStation 2

Batman Begins is a 3D superhero action-adventure game developed by Eurocom and published by Electronic Arts for the Xbox, PlayStation 2, and GameCube on June 14, 2005.

The video game tie-in to the feature film of the same name, players play as Bruce Wayne, a billionaire who searches for ways to fight the injustice in Gotham City. After being trained as a ninja in the mysterious League of Shadows (led by Ra's al Ghul) and stopping them (after finding out their true intentions of cleansing Gotham by destroying it), he returns to Gotham and dons the persona of the caped crusader, Batman. Following the plot of the movie (also including modified scenes from the movie in key cutscenes), Batman investigates an illegal drug shipment of crime boss Carmine Falcone, only to find intricate plots by Dr. Jonathan Crane (a fear-manipulating psychiatrist at Arkham Asylum).

One of the key elements of Batman Begins that separate it from the other Batman games is the concept of fear as a weapon. By performing certain actions, such as performing special interactions with the environment or taking out enemies in the vicinity, nearby enemies can become afraid. Scared enemies can have a variety of negative effects, such as sloppy fighting techniques, bad weapon aim, and (when very afraid) total disarmament. Batman can also interrogate most enemies, instilling fear while obtaining certain information or keys.

Fear is your weapon in Batman Begins as you are able to interact with a lot of your environment to take out enemies one at a time causing the remaining criminals to cringe in fear. This fear aids you in combat as the opponents that are scared of you are much easier targets. Moreover, fear allows opponents to give up information quicker. This is done through small sequences where Batman picks up an enemy who is trying to get away and interrogates him by punching him and asking him questions. Two of the face-buttons correspond to punching and kicking and another is for performing multiple enemy attacks and finishing moves. However the game does not have a very extensive amount of moves which Batman is known for and the animations are very repetitive.

The Batmobile sequences in this game are few and far between and resemble the Burnout games. The Batmobile can race through the streets of Gotham and ram vehicles off the side of the

Following the plot of the movie, Batman Begins tells the tale of Bruce Wayne's ascent from rich playboy to feared superhero.

When Bruce Wayne was just a child, he watched a mugger savagely gun his parents down out of desperation. As he grew, Wayne couldn't handle the pain inside of him and chose to travel the world learning about criminals, and the methods that can be used to disarm them. Having accumulated basic training, Wayne found himself in prison after trying to steal some of the merchandise from his own company, Wayne Enterprises in Eastern Asia. When he is sent to a two-bit prison he is confronted by a man called Henry Ducard who proposes Bruce join the League of Shadows, a force presenting justice to unjust places throughout the world. soon after, Bruce is released from prison and makes his way to the League of Shadows, based on top of a mountain. Impressing the League's leader, Ra's Al Ghul, Bruce trains with the League and develops his skill.

Eventually Henry presents Bruce with his final challenge, to kill a farmer who murdered another man. Bruce refuses and gets into a battle which kills Ra's and blows up the League. Bruce saves Ducard however, based on a mentor-student relationship that they have developed.

Returning to Gotham, Bruce begins to craft Batman, a vigilante persona he can adopt in order to wage war on the criminal syndicates throughout the city whilst protecting the people he cares about.

As Batman begins eliminating crime throughout the city, he learns of a grander scheme, one that involves a mysterious psychologist named Jonathan Crane, who poses as the Scarecrow, dumping a weaponised hallucinogen into the water mains. As Bruce delves deeper, he learns that Crane is working for Henry Ducard who is in fact the real Ra's Al Ghul, the one Bruce met earlier being merely a cover. Ra's explains that the League of Shadows serves as an executioner of civilizations, killing them off when they become too infested. When Ra's attempts to release the hallucinogen to the population via the air, Bruce battles him and eventually defeats him, saving Gotham City from turmoil. In the aftermath, Batman recieved a card from the Joker. 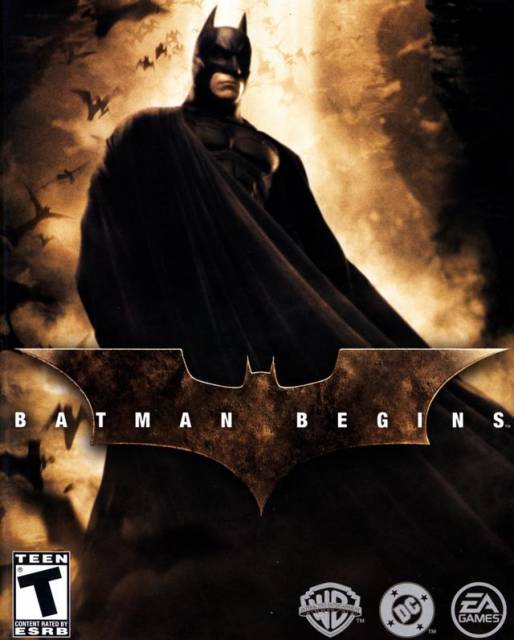