Duty Calls: The Calm Before the Storm

A short advergame for Bulletstorm, parodying the Call of Duty franchise.

Duty Calls: The Calm Before the Storm is an advergame developed by Other Ocean Interactive for the PC. Released for free on February 2nd, 2011, Duty Calls is a parody of the modern Call of Duty franchise (specifically the Modern Warfare games) and is secretly an advertisement for People Can Fly's Bulletstorm. The game uses a modified Unreal Engine 3. The player controls an anonymous American soldier tasked with retrieving a "nuclear missile bomb" from a "secret base" in Kemerovo, Russia in 2000. The game takes a crack at many concepts in the Modern Warfare sub-franchise, including multiplayer ranking systems and slow-motion sequences.

Though the game uses Unreal Engine 3, that fact (and the traditional Unreal Engine logos) is not readily advertised by the game's title screen, making it literally the only game to not advertise that fact; this is intended to underscore the game's masquerade as a simple parody game that was made in a college dorm room by a small number of people, instead of a professionally-made advertisement.

Duty Calls is technically a first-person shooter, with a basic control scheme; the player has buttons for firing (with the player character stating "Boring!" aloud with each shot fired), reloading, jumping, and a context-sensitive action button. The "game" consists of a single linear level in which the player can shoot the few enemies that appear, though no penalty is delivered for simply walking past each enemy. Only specific enemies are scripted to actually attack the player, and even then, they will always stop before the player dies.

On these occasions when the player takes damage, the edges of the screen are covered in a Modern Warfare 2-style strawberry jam effect while an announcer gruffly states, "Oh, bloody screen! So real!" There is also a single section in which the game enters slow motion. Specifically, the very moment after an enemy states that he can't be defeated unless the game were to suddenly enter slow motion, referring to the death scene for Call of Duty 4's antagonist, Imran Zakhaev.

Duty Calls also takes a crack at the multiplayer levelling and ranking systems seen in the Call of Duty series. By progressing through the level and gunning down enemies, the player frequently ranks up, earning a series of increasingly ludicrous titles, involving liberal use of the word "sergeant." Near the end of the game, the player earns the final rank "Sergeant of the Master Sergeant's Most Important Person of Extreme Sergeants to the Max!".

In Duty Calls, the player takes on the role of an anonymous American soldier tasked with retrieving a "nuclear missile bomb" from the Russian-accented bad guys. The game takes roughly five minutes to complete, during which time cutscenes play as a means to openly mock the narrative structure of the Modern Warfare-era Call of Duty titles. As an example, at one point, the game is interrupted by an enemy paratrooper who has this to say as he descends from the sky:

The paratrooper can be easily killed the moment the cutscene ends. The player is also instructed to collect items; obvious macguffins which are meaningless to the game apart from unlocking the next segment of gameplay, including a stick and a large amount of notebook paper.

When the player reaches the villain's base, a purposely anticlimactic cutscene plays in which the villain agrees to return the nuclear missile bomb and "cries tears" at the realization that "USA is dominate." After the ending, a trailer for Bulletstorm plays, claiming to be the game to "put the fun back in the gun".

According to the game's official website, the minimum hardware requirements are as follows: 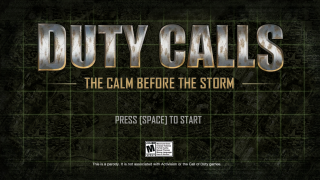