Step back in time to the mystical land of Gallowmere and assume the role of Sir Daniel Fortesque as he attempts to stop the return of the evil sorceror Zarok.

MediEvil is an action-adventure game developed by Sony Computer Entertainment Studio Cambridge and released in October 1998 for the PlayStation console. It tells the story of the undead knight Sir Daniel Fortesque as he does battle with the evil wizard Zarok and attempts to save the land of Gallowmere from his clutches. The game received positive reviews on its release and was noted for its unique sense of humour and varied arsenal of weaponry including swords, bows and guns. The game spawned a sequel, MediEvil 2, and was remade for the PSP under the title MediEvil Resurrection.

MediEvil's story borrows heavily from British legend and Medieval history, and there are notable references to stories such as the legend of King Arthur. MediEvil stamps an original seal on its story by lacing its historically themed events with a unique brand of humour.

The story itself begins one hundred years before the events of the game. Daniel Fortesque, a resident of the fictional realm of Gallowmere, entertained the King with vastly exaggerated tales of his past accomplishments as a soldier. Easily impressed, the King appointed Fortesque as a knight of the realm and head of Gallowmere's army. At around this time, the twisted sorcerer Zarok returned from several years in exile, accompanied by an army of undead mustered using dark magic. Fortesque was thrust into combat, and was killed by the first arrow fired in battle. The undead army was halted, but Zarok himself fled and was never found. To save the embarrassment of the truth ever being revealed, and to ensure his people felt save, the King fabricated an alternative account of the battle. He told his people Fortesque had died shortly after slaying Zarok, and the fallen knight was buried in a hero's tomb. The true events of the battle were lost to history, until Zarok returned...

The events of the game begin with Zarok returning to Gallowmere and once again using his dark magic to awaken the corpses of the dead, transforming them into an army of zombies. As a side effect of the spell, Sir Dan is also revived within his crypt. Now nothing more than an armored, one-eyed skeleton, Dan must live up to his false reputation and stop Zarok once and for all. The game follows Dan's quest through Gallowmere as he cuts his way through Zarok's armies and ultimately does battle with his arch-nemesis.

MediEvil's gameplay is comparable to that of most twentieth-century action-adventure games. The game's events take place across the land of Gallowmere, which is split up into several levels. Most of these levels consist of combat and exploration, broken up by the inclusion of simple puzzles and platforming.

MediEvil takes place in fully 3D environments, many of which are fairly open, something that was not common at the time of its original release. Exploring these environments is a major part of MediEvil's gameplay, in order to locate items, health vials and ammunition, and also to find solutions to puzzles in order to progress. The game contains many simple platforming elements, such as jumping across chasms or from one platform to another.

Most of MediEvil's puzzles revolve around finding Rune Stones and using them to unlock doors. Sometimes these magical stones will be lying around within the level environments, but often they will be located out of reach, and require the player to solve a puzzle to retrieve them. MediEvil's puzzles are for the most part simple, and designed to make the player think without frustrating them too much. Often, gargoyles will be situated near the site of any complex puzzle, offering cryptic advice on how to solve it.

Combat plays a big part in MediEvil. Each of the game's levels is filled with enemies, and as Dan moves through the game he amasses an impressive arsenal of weaponry with which to take them on. Defeating a level's enemies will fill that level's Chalice of Souls. When enough enemies have been defeated and the Chalice is full, it can be collected and exchanged in the Hall of Heroes for a new, more powerful weapon, or an upgrade to an existing weapon. Some of the game's levels will feature bosses, stronger enemies that require different tactics to beat.

MediEvil features a wide variety of weaponry and other useful combat items. Some of these weapons and items become available to Sir Dan as he progresses through the game's main quest, while others must be unlocked by filling the Chalice of Souls within one of the game's levels, collecting it and bringing it back to the Hall of Heroes. Most of the weapons fall into two categories; melee weapons and projectile weapons. Only one weapon can be equipped at any one time.

Shields and Other Items 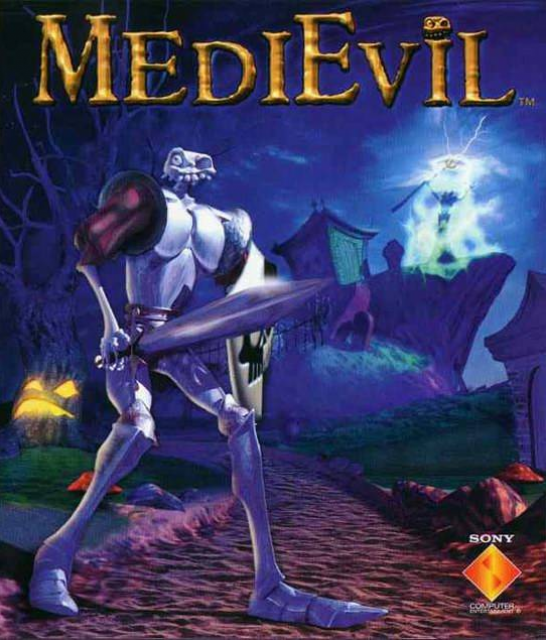