The official second sequel to Irem's R-Type. The game would use some of the SNES's best graphic features, including Mode 7 graphics.
Game Boy Advance

R-Type III: The Third Lightning, often known simply as R-Type III, is the third official game in the R-Type series of shoot 'em ups. It was released on the Super Famicom on December 10, 1993 in Japan with the game later being released on the SNES in the United States on August 2, 1994 (and in Europe a couple months later). The game was developed by Irem and published by Jaleco in the United States, while Irem took up publishing in Japan and Europe.

On March 26, 2004, the game was ported to the Game Boy Advance, developed by Raylight Studios and published by DSI Games and Zoo Digital. R-Type III was also emulated to the Wii Virtual Console on January 15, 2007.

R-Type III made a number of refinements and changes to the R-Type series, one of them being the first R-Type game to introduce new Forces. The game introduced the Shadow Force and Cyclone Force, both of which featured new weapon sets and special enhancements. R-Type III also made a number of enhancements to the weapons and charging systems. The game saw a return to the red-blue-yellow weapon system, as well as replacing the Diffuse Wave Cannon to a standard wave cannon that upon charging shoots a massive beam that clears the entire screen. R-Type III also saw the inclusion of a new cannon, the Hyper Wave Cannon. The only way to access this cannon was to enter Hyper mode and then charge the standard cannon fully. The Hyper Wave Cannon acts like the standard cannon except with rapid fire ability. Also when the cannon is in use, any Bits that the player has collected will spin around the ship during damage to any enemy that draws near. However, the cannon also cause the ship to overheat eventually, leaving a small window where the player can not shoot. 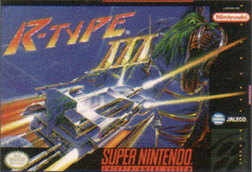