Gotham City Impostors is a team-based comedic first-person shooter developed by Monolith and published digitally by WB Games for the Xbox 360 (via Xbox Live Arcade), PlayStation 3 (via PlayStation Network), and PC (as a Games For Windows - Live release) on February 8, 2012.

Set in Gotham City, players are put into one of two opposing factions: freelance crime fighters dressed like Batman, and psychopathic criminals dressed like The Joker, calling themselves Bats and Jokerz respectively.

Along with paid downloadable content, Gotham City Imposters has been supported with free title updates, adding new costumes, maps, weapons, and features (including in-game joining). On August 31, 2012, the game was re-released on Steam (switching from the Games For Windows - Live system to Steamworks) as a free-to-play title. Those who paid for the PC version (from any distributor) can redeem their "CD Key" for exclusive rewards in the free-to-play version.

Games contain up to 12 players in 6 vs 6 team matches. There are various body types that players can choose from, that not only have an aesthetic appearance, but an effect on game play. The five body types are Speedy, Nimble, Tough, Burly and Mighty. Use of each in the custom classes require you to unlock them through gaining experience points and new levels.

Weapon load out consists of a primary "ready" weapon, a backup, a support item, gadgets and a perk system called 'Fun Facts'. The ready weapons are typical of the genre, including a small selection of rifles, SMGs, heavy machine guns and rocket launchers. Weapons can be customized further by swapping out ammo types and applying skins. Support items include items such as pipe bombs, boomerangs, trap-in-a-box, and an energy drink that instantly boosts health. The support items have a cool down period, but can give a significant advantage to players. Gadgets help players move around the map. These include items such as grapple guns, roller skates and a winged glider rig that can also be utilized to take down enemies.

Players can customize their characters (from cosmetic items to body types that impact the player's stats) as well as their equipment (such as grappling hooks and smoke bombs) as they set out to eliminate the opposing team.

Standard Team Deathmatch game mode, with the Bats and the Jokerz fighting each other for supremacy. Each kill contributes one point to the team's total, and the victory goes to the first team to reach 75 (50 in early versions) points (or whichever team has the most points when time runs out).

Conquest game mode where each team tries to take over the majority of three "Gasblaster" machines. Teams capture neutral and enemy-occupied Gasblaster machines by standing near it, and teams can defend the machines by also standing near it (nullifying the capture process). As a team controls the majority of Gasblasters, the atmosphere will fill up with their type of colored gas (green for friendly gas and red for enemy gas).

Once either team has reached critical mass (as noted on the bottom-left corner of the HUD), the opposing team will die and lose the match (the Bats' gas calls in a swarm of real bats that tear up any Jokerz still remaining, while the Jokerz release a deadly nerve toxin that kills any Bats still alive).

Assault game mode where both teams rush to acquire a neutral car battery that must be brought to their specific Propaganda Machines (special brainwashing devices located near the spawns of their enemy teams). Once the battery is inserted, a thirty-second countdown timer ticks down (in which the enemy team must detach the battery) until the team's Propaganda Machine goes off. A team earns a point by having their Machine activate successfully (and the team with the most points after the match ends win). The game runs for two rounds, with both teams switching Propaganda Machines and spawn locations at the half-time point.

When the team's Propaganda Machine goes off, it releases a brainwashing "propaganda" signal that demoralizes the opposing team (forcing them to lose control of their weapons and gadgets for 30 seconds). All they are able to do is a "panic slap" melee attack, which can kill enemies (giving bonus points due to its difficulty) and disable the Machine faster (by slapping it directly).

Team Deathmatch game mode, added in April 2012, in which players must collect coins dropped by dead enemies. Each enemy coin collected contributes one point to the team's total, and the victory goes to the first team to reach 50 points (or whichever team has the most points when time runs out).

A single-player game mode in which players can earn bonus experience points for completing special obstacle courses for each of the five maps (15 challenges for each map, split up by difficulty and gadget choice). Each challenge supplies the player with a gadget and one (or more) weapons, in which the player must use them to reach checkpoints and eliminate targets as fast as they can. Players can earn up to 100 experience points for each challenge by earning time-based Medals.

Each player equips two weapons at a time, out of a total of 16 (4 more added via free updates) weapons. Other than the Dawn Patrol and Thunder Dragon (Kingmaker in later versions), all weapons must be unlocked using Weapon Keys (earned by gaining experience and leveling up).

For each weapon, their weapon mods (with the exception of their default mods) must be unlocked using Weapon Mod Keys (earned by gaining experience and leveling up). Each weapon can also have a paint job (from camoflauge skins to golden guns) that must be unlocked by earning specific Feats of Prowess for that weapon. Later updates added three new paint jobs that can be found randomly in a Prize Box and five new paint jobs (resembling the five Gangs) that can only be unlocked by reaching Gang rank 99 with a specific Gang.

Other than the Grapple Gun and Pipe Bomb, gadgets and support items must be unlocked using Gadget Keys and Support Item Keys (both earned by gaining experience points and leveling up).

The game initially came with five maps, but several more have been added via free title updates since release. They all have various themes of locations around Gotham. There is a bit of emphasis on verticality, with the ability to get on top of most buildings and structures. All game modes can be played on all the maps:

Gotham City Impostors launched with over 100 pieces of paid DLC available, most of which are just cosmetic items like additional costumes & calling cards, and most of these items can also be unlocked simply by playing the game. The game does allow players to purchase double xp boosts for a set time period. 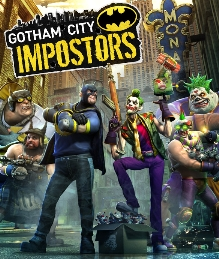