Infiltrate an Ork starship and stop their invasion of an Imperial Forge World as a pair of pumped-up Space Marines in this dual-stick shooter set in the Warhammer 40,000 universe.
Xbox 360 Games Store PlayStation Network (PS3)

In this arcade-style dual-joystick shooter set in the Warhammer 40,000 universe, players will play as a team of Space Marines. The story revolves around the Space Marines assault on an Ork Kroozer headed towards an Imperial Forge World in order to prevent the Orks from beginning a full-scale Waaagh!.

The game will feature up to two player, same-screen co-op and allows players to choose from four possible classes: the Sternguard Veteran, Techmarine, Vanguard Veteran and Librarian. Each class will have its own unique skills and abilities. Players will also be able to choose from six possible Space Marine chapters to fight for. The game will also feature boss battles against some of the Warhammer 40,000 universe's more popular enemies, including an Orkish Warboss and Weirdboy, and a menacing Tyranid Hive Tyrant.

The game also features an unlock in the form of an exclusive power sword for use in the multiplayer components of THQ's Warhammer 40,000: Space Marine.

Kill Team offers a single player campaign featuring six unique levels and includes couch co-op. Each level takes you through a different section of the Ork Kroozer you have been tasked with destroying before it reaches an Imperial Forge World. Missions are roughly thirty minutes each and feature lots of Ork slaughtering action.

The controls are more of the same for twin-stick shooter veterans; movement is mapped to with left stick, firing is done with the right. Sprinting is the left trigger and your marines special ability is mapped to the left bumper, grenades are picked up as special items and mapped to the right bumper and melee is the A button on Xbox 360 and the X button on the PS3. There are also power ups which can be found throughout the levels and allow the player to enhance their abilities for a short time.

Most missions revolve around taking on hordes of Orks and in a later level the Tyranids as you trudge your way towards an objective. Objectives vary from switches that need to be thrown in order to open a passage further into the level or destroying various objects to sabotage the Kroozer.

Before each level players can choose their weapons (each class three options) and can pick from several perks which enhance some aspect of the players abilities. These perks are tiered, with more powerful versions being unlocked as the player progresses and continues to score points.

Warhammer 40,000: Kill Team offers the choice of four character classes, some classes are better at ranged combat whiles others excel at melee. 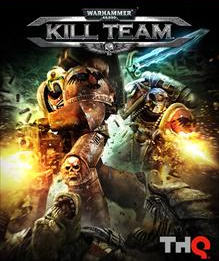