Announced at Gamescom 2011 by BioWare Mythic, this new Warhammer game will be Play4Free. Wrath of Heroes was shut down on March 29th, 2013.

Wrath of Heroes is a three-faction game that lets three teams of six players each go into battle in an MMO-like combat scenario. Rather than build a character, players select from preset heroes that fall into different classes and categories. Around 25 characters are said to be in the works for the game's launch.

Characters will have five abilities, one of which is spammable, with the other four working on cooldown timers. After a player dies, he or she can switch to a different character, allowing players to compensate for mismatches on the fly. Some locations from BioWare Mythic's full MMO, Warhammer Online: Age of Reckoning, will appear in Wrath of Heroes. Different arenas will have different objectives, allowing for capture-and-hold matches, team deathmatch, and so on.

WOH will be released as a " Play4Free" game, which is EA's branded term for free to play. A batch of characters will be available for use at any given time, and that batch will be rotated around over time, giving players a chance to try out plenty of different characters without having to pay money for them first.

On February 27th 2013, it was announced that as of March 29th 2013 (just shy of a year from its initial launch), Wrath of Heroes will be shut down and will be no longer available for play. Despite the impending termination of the game, Mythic Entertainment will continue to support the game with new hero releases up until server shut down.

Players earn rewards for their account as they play matches. Matches reward experience points, money that can be used in the store to purchase characters costumes and other items, and treasure chests that grant perks, tactics, and additional abilities.

At the end of each match a row of spinning slot machine like wheels appears. Depending upon certain goals achieved during a match more wheels are awarded to give the player rewards. Just for competing one wheel is granted. Further wheels are granted based on the map played on. Additional objectives can include being in the top 3 players of the game, joining the match in a group, achieving a certain number of kills or captures during the match, and so on. On top of this the game offers quests that you can cash in for more wheels.

Quests are general goals not specific to a single map that the game encourages you to complete. There can be up to three quests available at any given time. They include things like joining a game as part of a group 5 times, killing 5 enemies, gaining 40 assists, win 5 games, use a perk as a specific race, gain assists as a specific race, etc. Each time an achievement is completed and cashed in for an additional reward at the end of a match a new achievement takes it place. Players may "remove" an achievement if they don't feel like it is something that are able, or want to, complete. Removing an achievement removes it from your list of three active quests but leaves the slot empty for 24 hours to keep players from abusing them to search for easy to do quests and cash in too often.

Warhammer Online: Wrath of Heroes consists of three maps, each one representing a different style of Player vs Player vs Player. The map, and thus the game type, is chosen at random by the game when you join a new game and players have zero input on what is chosen. During play characters can swap between any heroes they have access to, free characters and purchased characters, between deaths.

Black Fire Pass is WO:WoH's version of capture the flag. Each of the three teams has a tower with a rune inside of each, with a fourth rune in the center of the map. The goal is to reach 250 points in the time limit. Points are acquired by killing enemy players or by holding three runes in your tower at once. To hold three runes at a time requires stealing runes from the other teams. While you gain additional points for killing enemy players, it is a considerably slower source of points than holding three runes at once.

Arena is the third game type and is as it sounds, an open arena map. The goal, as in the other two maps, is to be the first to reach 250 points. The only way to gain points in Arena, however, is to kill enemy players. Favors of the Chaos Gods appear on the map periodically and grant special benefits to the player that picks them up; such as healing, invulnerability, extra damage, etc.

There are currently 30 available characters in WO:WoH. More characters will become available as time goes on. Characters are available for play under one of two conditions; either a character is free to play or you must purchase a character to play them. Playing a free character however still comes with limitations.

Free characters are kept from being customized with special abilities, perks, and tactics which help give your character kill streaks and additional passive effects such as a chance to deal damage over time whenever you hit an enemy. Free characters also are not allowed access to the mastery tree which allows you to spend mastery points to modify your hero in specific ways that resemble skill trees from many RPGs such as World of Warcraft, The Old Republic, Rift, etc.

Wrath of Heroes was a fork of the original Warhamme Online developed over 6 months. A lot of client content stripped out which allowed it to be just over 1 gigabyte in size. The game now featured a lobby, which included the shop, character customisation options, friends and guild system and the ability to queue for scenarios.

As you were unable to change the gear of heros in Wrath of Heroes there was a much quicker turnaround time for producing new heros. However in hindsight this would have made it easier to backport assets to Warhammer Online after the closure of Wrath of Heroes.

The servers were adapted to be able to handle a lobby based game making the game "shardless". 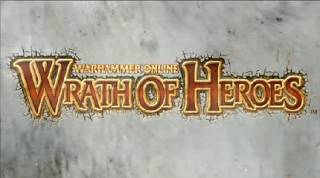