The direct follow-up to Konami's arcade shoot-'em-up classic Gradius, introducing customizable Power Meters with new power-ups. It had no official release in North America for 18 years.

Gradius II: Gofer no Yabō (sub-title loosely translated to "Ambition of GOFER", known in the European arcade and NES releases as Vulcan Venture, not to be confused with the MSX game of the same name) is a sci-fi side-scrolling shoot-'em-up developed and released by Konami for arcades in both Japan (on March 1988) and Europe (on May 1988).

The sequel to Konami's 1985 game Gradius, Gradius II puts players back in control of the starfighter Vic Viper two years after the destruction of the Bacterian super-fortress Xaerous. A new Bacterian force, led by the mysterious GOFER, is making their way to the planet Gradius, and Vic Viper is sent to stop them.

The game retains most of the gameplay from the original, with multiple new additions (including the Power Meter Select system, which allows players to choose from multiple power-up configurations prior to playing the game). Some of these additions were carried over from the original game's spin-off Life Force.

Gradius II is notable for not receiving an official release in North America, both in the arcades and in home releases, until the Gradius Collection compilation for the PlayStation Portable 18 years after the original.

All three ports were originally released exclusively in Japan.

The original arcade version was included in multiple compilations and digital re-releases:

The Power Meter system from the original Gradius returns, in which players start each life with minimal speed and a basic cannon shot, and can upgrade their ship by collecting Power Capsules to progress through their six-part Power Meter (and then using the Power-Up button to collect the meter's highlighted power-up).

In addition, players can change the original Gradius shields (Shield) for a new version (Force Field) as a separate choice. In the NES version, only the Force Field can be used.

These power-ups are, in Power-Up Level order:

Same as the original, the Speed-Up power-up increases the movement speed of the Vic Viper. This can be activated up to five times to further increase the speed, although higher levels can be very unwieldy.

Allows the Vic Viper to drop missiles that fall downwards on the playfield separately from its main weapon. Four different types are available in this game:

Improves the Vic Viper's cannon by having it shoot an additional shot. Replaces the Laser power-up. Two different types are available in this game:

Replaces the Vic Viper's cannon with a more-powerful laser cannon. Replaces the Double power-up. Two different types are available in this game:

Same as the original, the Multiple (or, in Japanese versions, Option) creates a ball of energy that follows behind the path of the Vic Viper and fires the same weapons (and missiles, if active) as the ship. In most versions of the game, this can be activated up to four times, each of which creating a new energy ball.

New to the series is a recurring enemy called the "Option Hunter" that can appear sometime after all four Multiples are activated. While it cannot damage the Vic Viper, it instead attempts to steal all of the ship's Multiples. Players are given time to dodge its attack to minimize the amount of Multiples stolen.

Provides a temporary barrier to the Vic Viper that completely negate projectiles in certain directions. These barriers have limited energy and can be destroyed.

This Power-Up is marked with the "?" symbol in the Power Meter. 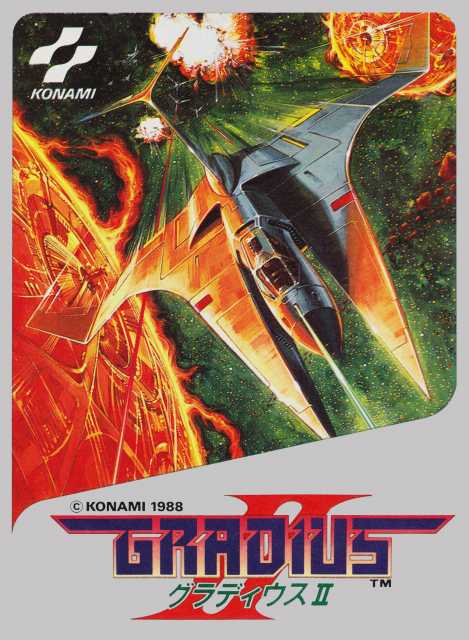