Blacklight: Retribution is a free to play first person shooter for the PC and PS4 developed by Zombie Studios.

Retribution again features a persistent unlock system using XP like Call of Duty (Leveling up) but the player isn't just given all guns as he/she plays. The player will need to buy or rent weapons or gun parts. The currency system is more closely like Tribes Ascend. There are 2 types of currency (as there is in Tribes Ascend) GP which is what a player gets when they get kills in a match or capturing an object, the other is ZEN (Perfect World Entertainment's) money bought currency, which enables a player to spend actual money to buy/rent Guns or gun parts without spending GP. Players can also purchase equipment during a match using one of several weapon depots located around the map. Players will need to acquire sufficient enough CP (by killing, assisting, or capturing points) before they are able to buy anything from the Weapon Depot. Some of the things a player can purchase is Replenish Heath, Refill Ammo, or the player can buy heavy weapons: Rocket Launcher, Flamethrower (and ammo for those weapons), or the Deadly Hardsuit.

New to the series, the mech-like Hardsuit can be purchased at weapon depots and airdropped onto a player-specified outdoor location. The Hardsuit is equipped with both a railgun and a minigun, which can be fired simultaneously. Hardsuits are very powerful and difficult to take down, but if a player uses the HRV (Hyper Reality Visor) then a weak point on the Hardsuit can be found and fired at to deal severe damage. Also another Strategy is for the player to use a Flamethrower which kills the operator of the Hardsuit but leaves the suit intact.

The player is unable to use a weapon while HRV is in use, and HRV can't be used infinitely it will need to recharge, then the player can use it again. The player can also see the health of a adversary by looking directly at them.

The rules of Deathmatch and Team Deathmatch in Blacklight are your standard fare. In Deathmatch, players battle one another until one player reaches a kill limit or the timer runs out. Team deathmatch plays by the same rules, but the players are split up into two teams.

In CTF, players are split into two teams and are charged with the task of stealing the opposing team's flag as well as protecting their own flag. CTF in Blacklight is standard, dual-flag CTF.

Kill Confirmed is similar to the Call of Duty game mode of the same name. The rules are identical to team deathmatch, except that kills are only counted if a token dropped by a dead player is retrieved by any member of the opposing team. If that token is picked up by the dead player's ally, the enemy team is "denied" the kill.

King of the Hill in Blacklight is, again, your standard fare. Two teams battle to control a small, circular area of the map until it expires and a new "hill" is generated elsewhere on the map. The team that reaches the point goal first, or who has controlled the various hills for the longest total time at the end of the match, win.

Domination has similarities with Battlefield's Conquest mode. There are a number of fixed stations on the map over which two teams battle for control. Controlling a station generates points for your team, and owning the majority of stations on the map results in your team gaining score faster than the other team. The team that reaches the point limit first or has the most points when time expires will win.

One difference between Blacklight's Domination and Battlefield's Conquest is that in Blacklight, players can hack stations to give their team control of that station immediately. Stations are hacked by playing a hacking mini-game where the player is shown three numbers; The center number must be matched with the number to it's left or right, and the player has a limited amount of time to pick the correct number. After completing this number-matching puzzle four times, the station is hacked. The player lowers their gun while hacking, making them extremely vulnerable to attack.

Netwar is a hybrid of Domination and CTF. There is one "flag" on the map that both teams must fight over, however, the flag is not ran to a team's home base. Instead, there are stations positioned throughout the map that the player can take the flag to, so long as the station is controlled by their team. Teams must defend and obtain both stations and the flag simultaneously, making for quite a hectic game mode. Unlike CTF, players can sprint while holding the flag.

The newest mode added to Blacklight, Siege is a type of "attack and defend" mode that is similar to the Payload mode in Team Fortress 2. One team is charged with escorting a walking tank towards the enemy team's base, repairing the vehicle when needed and hacking any obstructing gates along the way. The defending team must halt the tank's progress by keeping players away from the tank or by keeping their gates erected until time runs out. The defending team can also destroy the tank entirely, which will result in an immediate loss for the attacking team. 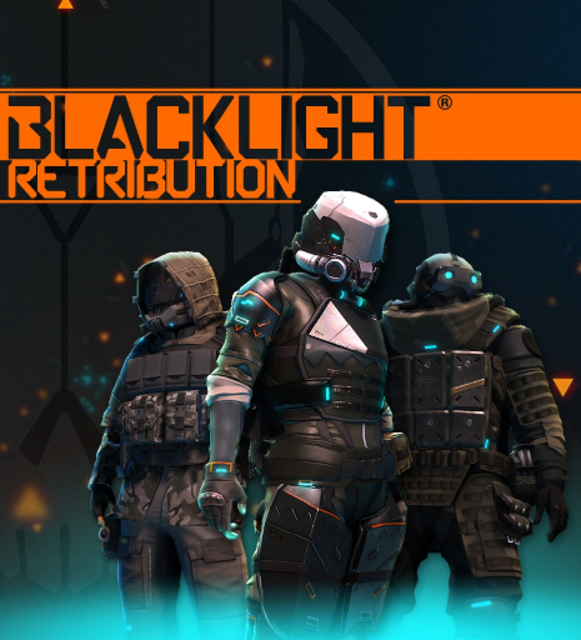