A crossover combat dodgeball game featuring characters from Mobile Suit Gundam, Ultraman and Kamen Rider. It was released by Banpresto for the Super Famicom (1991) and Game Boy (1992).

Battle Dodge Ball (or Battle Dodgeball) is a dodgeball game from Sun L and Banpresto that pits heroes and villains from the Gundam, Ultraman and Kamen Rider universes against each other in dodgeball matches. Similarly to Technos's Super Dodge Ball, each combatant has a health meter which depletes whenever they are hit by the dodgeball. Stronger throws cause more damage and once a character's HP is depleted, they leave the arena.

Teams have three members apiece, with an additional group of three identical "minor" characters that sit outside of the opponent's area and can try and hit them with any balls that leave their side of the court. During the single player mode the player can spend experience points they earn in matches to level up their characters' abilities, including the group of minor characters.

The game is Banpresto's second SNES entry in the Compati Hero crossover franchise (the first being SD Great Battle), which frequently sets up battles between characters of the three franchises above. Battle Dodge Ball would eventually be followed with a sequel, Battle Dodge Ball II. 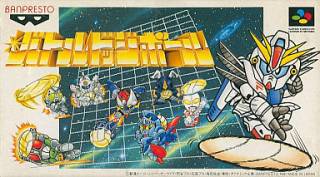