The player controls Baron Baldric; a weird old wizard with a staff and several different magic spells at his disposal. The game takes place in twelve different towers; each of which contains 5 floors with 9 rooms on each floor. The player's objective is to get rid of all the monsters in the tower. But in order for them to stop respawning, Baron Baldric has to destroy the monster generator which is always located on the third floor.

A lot of the game's difficulty lies in the process of traversing the tower. In order to unlock every room, the player needs to find keys; and often times these keys aren't even on the same floor as the doors they unlock. The baron also has a hunger and thirst meter that both slowly ticks down. It's up to the player to find food and water wells scattered all over the towers, or the baron will eventually start to take damage.

The game is played in an isometric view using the arrow keys for movement (the game also supports the joystick). Since these types of controls aren't very common, they take some getting used to. That in combination with the fact that Baldric can't move and shoot at the same time, can make the game very difficult, especially in the later levels. 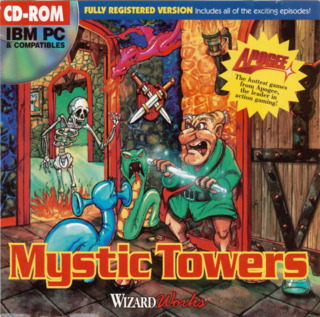