Harmonixer Yuri Hyuga returns in this direct sequel to the 2001 RPG game Shadow Hearts with real historical elements. Yuri and his friends set on a journey across the world to combat the evil Rasputin and new evil entities that may well change the course of the 20th century.
PlayStation 2

Shadow Hearts: Covenant takes place six months after the original installment, Shadow Hearts. The game follows the "bad" ending of the original title. The game is set during World War I. It continues to tell the story of Yuri Hyuga, the young Harmonixer who has the power to fuse his soul with those of powerful demons. After the death of his loved one Alice, Yuri moves to the small village of Domremy and remains there as if in a state of exile. Such peace, though, does not last long, as rumors of a demon protecting the village start to surface. Soon, German troops attack the village. In the midst of combat Yuri is struck by a magical mistletoe, which curses him and disrupts his harmonizer ability. This Mistletoe was lodged into him during his strange attempt to rescue a lady named Karin. Yuri always says that she reminds him of his mother later in the game. Together, they both meet new people and learn new skills on their journey to save the world from malice and hatred and evil domination of a friendly, yet hurt soul. He then sets off to find a way to lift the mistletoe curse, and to discover that new forms of evil loom the world.

Shadow Hearts: Covenant is a traditional turn-based RPG with some new twists on the classic formula. The most noticeable gameplay addition is the judgment ring. The judgment ring is a spinner that requires you to press the X button at certain intervals in order to successfully perform attacks. This blending of RPG and rhythm game elements adds a layer of depth not found in other RPGs. Unlike the original Shadow Hearts, Covenant allows players to customize the ring in many ways, such as number of attacks, critical area range and speed. Also, each character that joins your party has a specific skill which must be upgraded in some unique way. Aside from skills, the characters can also use magic. Different from the first game in the series, magics are not associated with each character. Instead, you'll be able to assign Crest Magics to each of them, deciding which type of magic they'll be able to use. Also debuted in this game is the Combo system, which links characters attacks to create devastating damage.

Yuri Hyuga - The protagonist, Yuri is an anti-hero with an attitude and a penchant for the words "bite me." Yuri possesses the ability to transform into various demons. As Yuri collects monster souls, he is able to transform into seven different types: Fire, Earth, Water, Light, Dark, Wind, and Non-Elemental. This abilty, known as Fusion, is unique to his bloodline. Because of this ability, Yuri has no natural magical abilities and cannot equip crests.

Karin Koenig - The lead female character. Karin is a lieutenant in the German Army. She is sent to the village of Domremy when she meets Yuri, the harmonixer who makes her question her role. Gameplay-wise, Karin is of the fire affinity and learns personal skills by collecting opera manuscripts. She was supposed to act as Yuri's love interest during the game (as seen mostly on disc 1, but due to a fan outcry saw this aspect of the game diminished as the game continued. Her destiny in the Shadow Hearts universe was something altogether different.

Blanca - A wolf that understands humans but can not speak (Yuri hints that he can actually understand him, but really only gets the vague notion of what wolves are getting at). Blanca learns new skills by participating in wolf fights around the world. During those "Wolf Bout" encounters, the player hears him speak to his soon-to-be opponent, showing Blanca to be wise, but willing to defend his honor and friends through combat.

Joachim Valentine - Brother of Keith and Hilda, Joachim is an over-the-top gay superhero that doubles as a wrestler. He can turn into a Golden Bat (increasing physical damage immensely but making him unable to use magic), Invisible (meaning enemies never focus attacks on him), or Grand Papillon (a combination of the other two forms). Joachim very much acts as a comic relief character and gains skills by defeating his wrestling teacher in a battle of sudden death.

Lucia - A dancer and aromatherapist taught by a former member of the secret society that hunts Yuri. Lucia can use tarot cards in battle to baffling effect, both positive and negative. She also can support the party using aromatherapy, which combines two scents for an always-beneficial effect. The number and effects of Lucia's higher level skills, combined with her high MP and magic skill, make her the most versatile support character in the game.

Anastasia Romanov - The 14 year old princess of the Russian royal family, Anastasia is brash and likes to take pictures. She can see enemy stats by taking pictures of them, revealing HP and elemental affinity. Certain monsters, when photographed, will grant the princess the ability to summon that monster in order to perform a unique spell. When she's not on the combat team, enemy stats are not actively visible, but can always be viewed in the main menu.

Kurando Inugami - A quiet youth with no discernible abilities at the beginning of the game. He fights with mid-sized samurai swords. He is found to be a harmonixer like Yuri, but only after a pair of combat areas after the start of the second disc in Japan. His power and SP make him suited to the role of offensive party member with some support trappings (again, like Yuri).

Roger Bacon - 700 years old and wise, Roger has a previous relationship with Yuri and is knowledgeable in the dark arts.

Nicholai - A mysterious man with an affinity for Karin and a hatred for Yuri.

Rasputin - A powerful mage controlling Russia from the shadows.

Kato - A minor character from the first game that works for the Japanese army.

Albert Simon - villain of the first game, Albert only lives on in spirit in Covenant.

The official soundtrack to the game was composed and arranged by Yoshitaka Hirota, Yasunori Mitsuda, Kenji Ito, Tomoko Kobayashi and Ryo Fukuda. 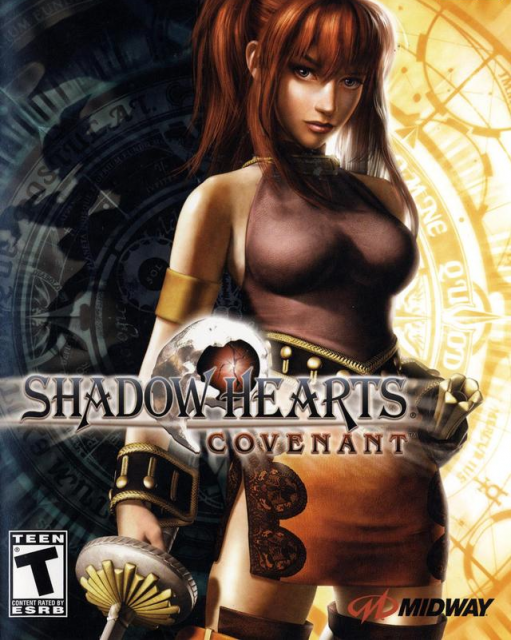