The King of Fighters '97

The King of Fighters '97 is a 2D tag-team fighting game developed and released by SNK for arcades (running Neo Geo MVS hardware) on July 28, 1997. It was subsequently released for the Neo Geo AES and Neo Geo CD later that year.

The third and final part of the series' "Orochi Saga" arc, the game's story takes place a year after the defeat and demise of Goenitz (the leader of the followers of the divine being Orochi). Despite the incident (which destroyed the main stadium), the tournament's success triggered a worldwide phenomenon leading the new King of Fighters tournament. While there is no mysterious benefactor, it is later revealed that the tournament is being used to strengthen the power to resurrect Orochi itself.

As the game hints at the tournament being a worldwide phenomenon, some changes were made in the game's presentation (stylized like a television broadcast). Unlike previous games in the series, where each team has their own represented stage that are lightly populated, all of the game's six main stages are densely populated and "festival" in nature. Teams also no longer have their own specific theme song in the background, with some characters having their theme song played when fought against and others being restricted to the stage's general ambience. While the series continued to use stages that are not team-specific, King of Fighters '97 is the only entry to have ambience for fights instead of music.

The King of Fighters '97 plays like a traditional 2D fighting game, using four buttons (Light Punch, Light Kick, Strong Punch, and Strong Kick). Most of the gameplay remains the same as its predecessor, with some new additions and changes (including updated movelists for all characters).

Main Changes from King of Fighters '96

One new gameplay mechanic unique to this game (and its sequel) is the ability to choose between two distinct playstyles, or "Command Modes", each with their own unique techniques and power gauges:

For those who prefer a newer-style Power Gauge and the more offensive avoidance attack of The King of Fighters '96.

Pressing both Light buttons simultaneously can make the fighter perform a forwards rolling dodge used for avoiding attacks (including projectiles) and cross-up opportunities (as one fighter can roll past the other, forcing them to adapt). While holding backwards on the joystick, this uses a backwards rolling dodge instead. It can also be used to escape standard throws.

In addition, dashing forward uses the running dash from The King of Fighters '95. While it's slower than normal dashes, it can be held down and released for better control.

Tapping Up on the joystick (rather than holding Up) performs a shorter hop for quicker recovery.

The Advanced Power Gauge's main draw is the option to store up to three charges, or "stocks" of the gauge to use later. After filling the main gauge, it depletes and one Stock lights up. After three Stocks are lit, the gauge cannot be filled at all until a Stock is used. The gauge is charged mainly by performing special moves, but is also charged at a slower pace by both giving and receiving damage.

Each Stock can be used up to activate one of four things: a Super Special Move, a Guard Cancel Dodge, a Guard Cancel Attack, and a "MAX" state. The MAX state (as indicated by the fighter flashing bright) is similar to that of previous games, where the fighter's basic attacks become stronger (by +25%) for 20 seconds. While players can use additional Stocks for the other three attacks in MAX state (with the Super Special Move changed to a flashier, more powerful "MAX" version of it), players can not fill the gauge while in MAX state and can not end the MAX state prematurely to perform the other techniques for free.

Unlike the Extra Power Gauge, the Advanced Power Gauge does not fully reset between each round. If the player won the previous round, their gauge remains the same. Otherwise, the gauge itself is fully depleted and their Stocks remain the same. In the game's Team Mode, players gain an addition Stock if the current character has a positive Affinity with the previous character and lose all Stocks if the current character has a negative Affinity with the previous character.

Unlike in previous games, players with the Advanced Power Gauge can not perform a Super Special Move at any time while their vitality is low.

For those who prefer the classic Power Gauge and the more defensive avoidance attack of The King of Fighters '95.

Rather than a rolling dodge, pressing both Light buttons simultaneously can make the fighter perform a side-step dodge (called an "Avoid"), shifting the player's fighter to the background to avoid attacks (including projectiles). However, it leaves them vulnerable to throws. Rolling dodges are still used in certain situations, though (such as Guard Cancel Dodges and using the command to instantly recover from a knockdown).

In addition, dashing forward uses the hopping dash from The King of Fighters '95. While it is less controllable, it can be a faster maneuver for closing the gap.

The Extra Power Gauge's main draw is the added ability to charge the gauge manually. By holding down Light Kick and both Punch buttons simultaneously, the fighter can begin charging up (while leaving themselves vulnerable to attacks). It is also charged automatically at a slower pace by blocking attacks and receiving damage. It also resets between each round.

Once the Power Gauge is filled, the player enters a "MAX" state (as indicated by the fighter flashing bright) where their basic attacks become stronger (by +50%) for 20 seconds. After that time elapses, the MAX state ends and their Power Gauge is fully depleted. However, players can end the MAX state prematurely by performing either a Super Special Move, a Guard Cancel Dodge, or a Guard Cancel Attack.

Like in previous games, players with the Extra Power Gauge can perform a Super Special Move at any time when their vitality is low (as shown by a blinking life bar). However, performing this technique while in the MAX state at low vitality changes it to a flashier, more powerful "MAX" version of it. In addition, activating MAX state with a low vitality increases the duration to 25 seconds (as shown by a larger timer bar).

Changes made to the roster include newcomer Shingo Yabuki (a joke character similar to Kyo Kusanagi) making his debut without any team affiliation. Iori Yagami, having disbanded his second team, is also playable without any team affiliation. Chizuru Kagura, the previous game's sub-boss, takes Kasumi's role in the Women Fighters Team. The game features two newcomer teams, one of which features characters from the Real Bout Fatal Fury series (including the return of Billy Kane).

Rather than have one fighter be the game's main sub-boss, the game features a sub-boss team (as one of the game's newcomer teams become "unlocked" when they are revealed to be the last remaining followers of the divine being Orochi). The game's final boss is Orochi itself, possessing the body of the newcomer Chris. 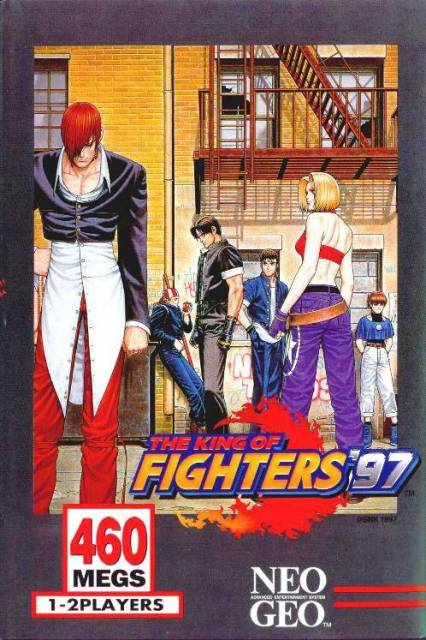