Escape from the zombie-infested city of Los Perdidos, California in the third installment of Capcom's Dead Rising franchise.

Dead Rising 3 is a third-person action-adventure survival horror game developed by Capcom Vancouver and published by Capcom for the Xbox One (as a launch title) on November 22, 2013. It is the third original installment and the fifth overall release in the Dead Rising franchise. A PC version of Dead Rising 3 that includes all four DLC packs, dubbed Apocalypse Edition, is set to release on September 5, 2014.

Set 10 years after the events of Dead Rising 2, players control Nick Ramos, a mechanic (with a mysterious past) who must escape the fictional zombie-infested city of Los Perdidos, California before an impending military strike.

Along with the Combo Weapon feature from Dead Rising 2 (though now it no longer requires a workbench), the game features a new Combo Vehicle feature (allowing players to create new crazy vehicles), the choice of removing both the traditional countdown timers and restricted game saving (putting them in a new "hardcore" difficulty), a larger open-world map (with minimal loading time between locations), Kinect voice support, and SmartGlass integration.

The game was one of the three Xbox One games (along with Ryse: Son of Rome and Forza Motorsport 5) to have a limited "Day One" edition, which adds chrome-looking cover art and a special piece of DLC. This edition of Dead Rising 3 includes the "Tribute Pack" DLC, which includes outfits based on the franchise's previous two protagonists (each including unique bonus attributes).

In the attempt to make the game more accessible to series newcomers, Dead Rising 3 has removed the countdown timer, which was a series staple, and bathrooms are no longer required to save one's game progress. Though these modes can be reintroduced with the "hardcore" game difficulty.

Survivors return, this time a player can command them to defend and scavenge for items. Located through out the world, psychopaths make their return in Dead Rising 3.

Coop will return to Dead Rising 3, here players can jump in an out the session at any time. In previous Dead Rising titles players are both Chuck Greene, in Dead Rising 3 one player will be Nick Ramos and the other player will take control of Dick. There is no local coop for Dead Rising 3. Both players can go anywhere in the world as they are not anchored to each other. When in coop players can go through the main story arc toghether, or complete side missions together, both players will level up by earning PP and unlock that specific mission.

The Kinect sensor will alert zombies in game whenever you make loud noises in real life or turn on a light in real life. Voice commands can be used to taunt your enemy and give commands to survivors, for example a player can physically point towards a specific place and say "Go There" to a survivor.

The game features Smartglass exclusive characters, new weapons and exclusive missions. For example a air strike can be called when being over run by the horde. A player can use their smartglass device to answer the phone calls and recieve text messages. Mission check lists track mission progressions.

Maps help a player find certain location and help locate hidden items. A smartglass news ticker will give a player updates on the outside world and the zombie horde. There are specific crates around the world that require smartglass, inside there are items for the player to salvage.

Unlike the past Dead Rising games, Dead Rising 3 will feature a full open world. The map of Dead Rising 3 is bigger than both Dead Rising and Dead Rising 2 combined several times over, offering no loading times when entering a new area. Every building in the world is accessible and contains items.

Avaliable for $29.99 USD, the season pass will give access to 4 untold stories of Los Perdidos each priced at $10, giving the player a discount of $10 USD up front.

"Dead Rising 3: Operation Broken" - Here a player takes control of Adam Kane on a mission to capture the missing President of the United States. Features (5 new Weapons, 1 New Vehicle, and new clothes are added to the game)

"Dead Rising 3: Fallen Angel" - In this untold story Angel Quijano is fighting to protect her group of survivors from the corrupt government military. Features (5 new weapons, 1 new Vehicle and new clothes are added to the game.)

"Dead Rising 3: Chaos Rising" - Episode 3 of the Untold Stories of Los Perididos puts you in control of biker Hunter Thibodeux who must escape from prison and seek revenge against those who put him there. Features (5 new weapons, 1 new combo weapon, 1 new vehicle, and new clothing outfits)

All of the above downloadable content is included with the PC and Xbox One release of Dead Rising 3: Apocalypse Edition.

An expansion of the Dead Rising universe starring Dead Rising characters Chuck Green, Annie, Nick Ramos, and Frank West. The expansion gives players the ability to cosplay as characters from various Capcom franchises. This expansion also adds a 4 player cooperative mode where player fight through various stages against zombie hordes using special abilities and attributes from the different characters. The expansion was not included in the Apocalypse Edition of Dead Rising 3 and has only seen a Xbox One release thus far.

A version of the game containing all 4 untold stories of Los Perdidos (Super DR3 DLC excluded). This version was released on the PC and at retail and as a digital bundle for the Xbox One. 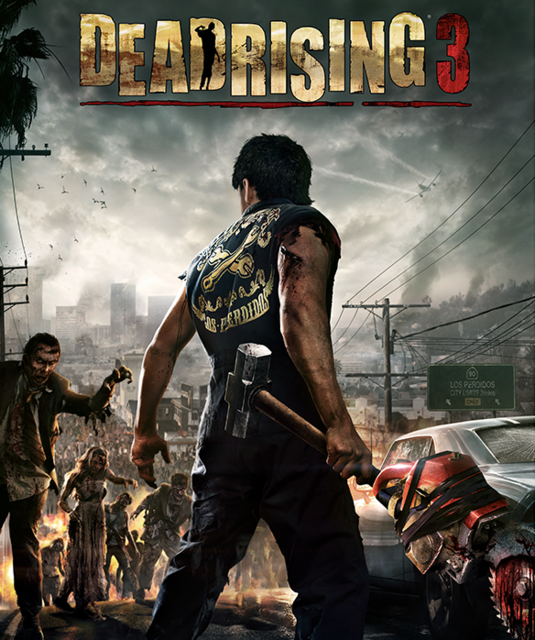