Galak-Z is a sci-fi roguelike space shooter inspired by anime of the 1970s and '80s.

Described by 17-bit Games lead Jake Kazdal as "Far Cry 3 shoved down the throat of R-Type 3," Galak-Z a roguelike space shooter in which the player controls a transforming ship exploring space, avoiding and engaging in combat, and collecting resources in order to make their ship more powerful through upgrades. Each stage is an episode and a level is a season. Completing one level opens up the next.

Galak-Z was first announced as part of Sony's 2013 E3 Press Conference, where it was revealed that the game would debut first on PlayStation platforms. The PlayStation 4 release eventually launched on August 4, 2015, with the PC version releasing later that year in October. A fifth season was planned as a free update to launch alongside the PC release, with early versions of the game going so far as to include the fifth season as a locked menu option with a "Coming Soon" tag. Ultimately, 17-Bit, citing player feedback, abandoned the idea in favor of a leaderboard-focused endless mode with daily challenges. The mode, entitled "The Void," was released as a free update to the PC version on May 6, 2016; the PlayStation 4 received the update later that year, on August 4. Ports were also planned for PlayStation 3 and Vita to take advantage of Sony's cross buy system, but were ultimately canceled.

Galak-Z is a top down shooter with many elements in common with other popular modern rogue-likes: Spelunky, Rogue Legacy, Crypt of the Necrodancer. Individual stages are randomly generated using tilesets and are inhabited by randomly placed enemies, loot and obstacles. Enemies and environments operate within very strict rules. These rules are not clearly explained, but are learned through repeated attempts.

The Galak-Z has upgrades for many of its systems. Some upgrades stack while weapon systems can be swapped between.

Early in the 1st season the player will unlock the shop, which will spawn somewhere within each episode and is available before each mission. His inventory is randomized with additional upgrades added to the mix as the player finds blueprints. This is similar to how items unlock in the Binding of Isaac. The shop will not spawn with upgrades currently on the player's ship, but you can find upgrades in the level which duplicate what is in the shop. This makes it possible to purchase an upgrade you already have. The primary currency is scrap, which can be picked up after defeating enemies, inside space debris and crates.

Upgrades can be picked up within the levels, generally in randomly placed crates, but sometimes drop from enemies.

Special pickups that are permanent unlocks. This allows the player to have access to better equipment sooner in later seasons 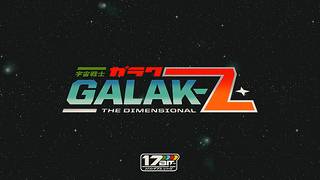