Delta Force is a first-person shooter, released on the PC, which puts players in the shoes of an elite military task force as they undergo missions across the globe.

In Delta Force, players control a member of Delta Force, a counter terrorist force that specializes in the use of small units and advanced weaponry, in fictional conflicts across the globe. Players and their team are given missions in different parts of the world, including the following:

The player is assigned with a different mission in each of around 20 locales. Some involve actions such as the escort of a VIP, searching for nuclear weapons, or destroying an enemy HQ. At the start of each mission the player chooses from a series of weapons and equipment including,

Many missions require the use of stealth and night vision goggles, this affects the player's starting gear, but retains customization of equipment. Multiple objectives are assigned to the player, however they can choose to ignore secondary and tertiary one and approach the main in any way they choose. Sticking close to other squad members is often essential in surviving combat scenarios.

Enemies are not very smart when it comes to fighting off Delta Force, meaning the player does not have a very difficult time so long as he is careful. The player can dispatch of an enemy from long range yet the unit standing next to him will not be alerted. Enemy helicopters have a tendency to fire constantly at the last known position of an enemy, allowing the player to manoeuvre around and hit it from behind, at which point the vehicle will break off it's engagement and attack the player directly again. The player encounters various enemies throughout the game although almost all use AK-47s and differ only in the color of their camouflage.

One to three squads are present in most missions acting as support for the objectives. They are named according to their call sign, Alpha Team, Bravo Team, and Charlie Team. These squads act autonomously from the player and can be killed by the enemy. The player's squad will follow a set order of objectives, the player may follow along or simply go rogue. At times the player receives support from a Uh-60 Black hawk helicopter which also acts as the extraction point for Delta Force.

The player undergoes a variety of missions spanning the glove, from defending a South American president's limo to locating Nuclear Bombs in a former Russian military base. Some missions have time limits while others demand total stealth.The game uses an early 3D engine allowing for large maps with foliage and various textures. 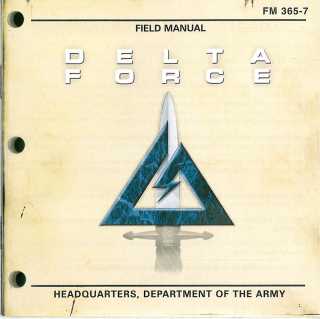