This game was originally pitched on Steam Greenlight as a free to play game on June 25, 2013, and later released on January 28, 2014 as a normal pay-once game .

The game is built using the Unreal Engine.

According to the initial Steam Greenlight pitch, the game will see some DLC developed in the future. All DLC will be free for everyone who owns the game regardless of when the game was purchased.

The first free DLC patch titled "Tasty Walls" launched on the 28th of February and contained the following:

Unlike most modern shooters Strike Vector has all of its 8 weapons unlocked from the start. You can equip two weapons, one on each side of your ship in any type of combination. 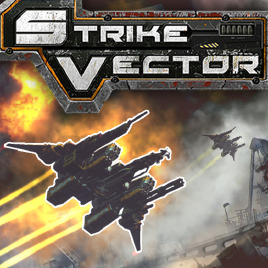