A massively multiplayer, real-time strategy, and action game set on the world of Planet Visitor. Setup alliances across the world of Visitor to secure global domination. Own, Mine, Defend, Survive!

10Six was Sega's first foray into MMO's, a persistent online RTS where players signed up for one of four mega-corporations aiming to conquer the rogue planet Visitor, which has entered the solar system and contains a treasure of valuable resources.

Players construct and capture mining sites, construct defenses and NPC units to help defend and attack in a fairly traditional RTS mode, but much of the game also consists of player on player combat in first or third person modes, similar to Battlezone or Planetside.

The server infrastructure was designed to be able to handle a million simultaneous players and was hosted through SegaSoft's Heat.net, but never saw player counts that high. After failing to attract a sufficiently large audience Sega shut down the game in June 2002, offering refunds to anybody with subscription time left.

A community effort to relaunch the game was started soon after the servers were taken down. Conundrum Studios was formed in late 2002, and the game was relaunched under the name Project Visitor in 2003. 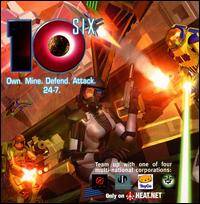