A class-based, sci-fi arena shooter in a world where gravity has become distorted and the Law is waging a war on those who would break it. It was later discontinued on September 14, 2018.

LawBreakers was a multiplayer-focused sci-fi first-person shooter developed by Boss Key and published digitally by Nexon for the PlayStation 4 and PC on August 8, 2017. It also received a limited-edition retail release by Limited Run. The online servers were later shut down on September 14, 2018.

The first game by Boss Key (founded by former Epic design director Cliff Bleszinski and former Guerrilla director Arjan Brussee), Lawbreakers was a team-based arena shooter, set in a post-apocalyptic sci-fi world, with a unique class-based system (called "Roles", where character selection is tied to both the Role and the team) and a focus on special movement abilities.

After the dissolution of Boss Key, the PC version of the game became free-to-play on June 11, 2018 (with all in-game purchases disabled) prior to closure of both PS4 and PC servers.

A Capture the Flag-style mode with one "Battery" acting as the flag. Teams must race to carry a neutral battery to their base and protect it for 20 seconds after it hits 100% charge to get a point for their side. However, a stolen battery will retain the charge it had before being removed, which means even a losing team can still claim a point if they take and secure the battery from the enemy's base at 99%. The first team to 3 points wins.

Similar to Overcharge, except the flag is a satellite dish. The charge retained is not tied to the dish, but to the team's own upload percentage.

A territory control style mode in which teams must lock down up to three vital locations on the map per round. When all three points are controlled, the points will be added to the total of the team controlling each one, and the points reset to neutral control 15 seconds later. The game continues until one team hits the maximum number of points.

Two teams must race to take the "E.U.R.O. Ball" (the Blitzball, voiced by Justin Roiland) from the middle of the map and run it into their enemy's base, all the while listening to the ball complement or insult them depending on their performance. However, if they take too long, the ball will explode and take the carrier with it.

A King of the Hill-style mode where one team must occupy a single victory point on the map, earning points for maintaining their occupation and for defending it against incoming enemies. The point itself shifts around the map every 45 seconds. The first team to reach 200 points wins.

A separate mode with no objectives other than to rack up the most enemy kills as a team, either hitting the maximum number of kills or the most after 20 minutes of play.

A front-line fighter equipped with a flight suit that can jet around the battlefield and strike at the enemy from any range.

Member of the Valkyries. A huge fan of the old movie Top Gun, Maverick based her callsign and identity around it as she went through boot camp. Currently seeks to hunt down Toska-9 for her betrayal.

A Russian fighter pilot who went through the same boot camp as Maverick, and rose near the top of the rankings with her. However, her angry demeanor often clashed with the other recruits. When The Syndicate offered her a large sum of money to join them, Toska proved her worth by stealing a prototype flight suit and killing most of her class on her way out.

A dutiful Sargeant within TASC who enforces the law to the letter. The first man to charge into battle and the last out, a picture of the ideal law enforcer.

Brother of the head of the Shura Corporation and its chief enforcer. Known mostly for his hard-partying lifestyle filled with booze, drugs, and beautiful women, but loves killing enemies to back up his bragging.

A powerful tank that can leap into danger and deliver large amounts of damage up close while taking heavier damage than most others.

Former MMA fighter who refused to take a dive when asked to by a corrupt coach. After being forced out of competition, she decided to put her talents to work for the law as a TASC agent.

A death row convict who somehow survived the electric chair. After being broken out of prison with his fellow Lifers, Cronos decided to take his revenge on all law enforcement.

A flanker who can use their daggers as makeshift grappling hooks to harass the enemy's backline or quickly escape if things go south. Unlike other classes, has the ability to double-jump.

Despite losing her legs when she was younger, Hellion somehow managed to keep up her spirits. She soon got new, metallic replacements for her legs, and has thanked her benefactors by using them to hunt down criminals.

The young head of Shura Corporation who is just as deadly in the boardroom as she is in battle with her blades.

A master duelist. Though not very fast, is capable of picking off single targets from nearly any range. Unlike other classes, carries both weapons (Alpha & Omega) in each hand, and can use them simultaneously.

The founder of the Archangels. A man from the future who witnessed the downfall of humanity and warped back to the past to stop it, but his miscalculation accidentally led to The Shattering that broke the Moon and forever changed Earth. Abaddon seeks penance by hunting down the criminals he indirectly created, hoping that his active participation in past events can prevent history from repeating itself.

A German assassin and representative of The Syndicate who was supposedly assassinated by the Valkyries, but just barely managed to survive their nano-virus. Now having supposedly risen from the dead, Faust returns to wreak havoc on those who tried to kill him.

A combat droid that can take more punishment than any other class. The Juggernaut is adept at protecting itself and its teammates, and can destroy enemies up close.

A heavily-armored combat droid used by TASC for riot control and maintaining order in various situations.

An older model combat droid that was hijacked by the Lifers, and later reprogrammed by a hacker to help their criminal activities. Nash often speaks in lines from 1990's action movies, reflecting the likes of the hacker who reprogrammed him.

As the name suggests, the Medic is capable of healing teammates within its line of sight, but won't last long in a straight-up fight. Capable of hovering around the battlefield.

A huge fan of the Valkyries growing up. Even as she studied medicine and medical technology, Tokki pursued her dream and ended up joining the Valkyries as a battle medic, ready to heal allies and fight enemies on the front lines.

Chief scientist of the Shura Corporation's private security division who dabbles in cybernetic replacements, which included replacing a large portion of his own body with robotics. Has little patience for anyone he sees as beneath his intelligence, which is almost everyone.

Similar to an assassin but much more extreme. Unlike other classes, has the ability to triple-jump, and can also wall-jump to extend his air time.

A bored yet highly-athletic prince from the UAE who decided to use his talents to hunt down criminals with the Archangels.

Faust's right hand man in The Syndicate, little is known about his true identity.

Long-range support character, capable of using lasers to propel themselves around the battle and to destroy enemies.

An English woman who pursued her childhood dream of joining the Archangels. Her hard work and upbeat demeanor helped her quickly rise through the ranks to serve as Abaddon's trusted ally.

A member of the Lifers from Haiti who was put in jail for trying to resist TASC's presence in his home country. After breaking out with Cronos and other Lifers, Baron seeks his revenge on TASC.

In the near-future, clandestine experiments on the Moon ended up cracking its crust, leading to an event known as The Shattering on Earth where gravity becomes distorted and parts of the Earth float into the air. Though humanity somehow manages to recover, 100 years later, the balance of power shifts wildly across the globe. Multiple drug cartels, criminal gangs, and shadowy corporations have formed an unholy alliance to take control of the broken world.

The only thing standing in their way are the forces of the Transnational Authority of Supplement Control (TASC), a multi-national law enforcement organization dedicated to maintaining peace and order in the world.

The game was initially centered around a Free-to-Play model, but in March 2016, Bleszinski announced that the game would be on a Pay-to-Play model instead, but promised it would not be a full $60 release.

The game began signing up players for a public Alpha build in April 2016.

The standard addition of Lawbreakers would launch at the below-average price of $29.99 in the US, for the PC and PS4 as digital downloads. Along with all characters and maps unlocked for play on day 1, everyone would receive an exclusive skin each for Hellion (Sunflare) and Kitsune (Honor Bound), the Assassin characters.

Limited Run Games offered a physical edition of the PS4 and PC versions, limited to a maximum of 2,500 copies at $69.99 each. The package included everything in the Deadzo Deluxe Edition, plus: 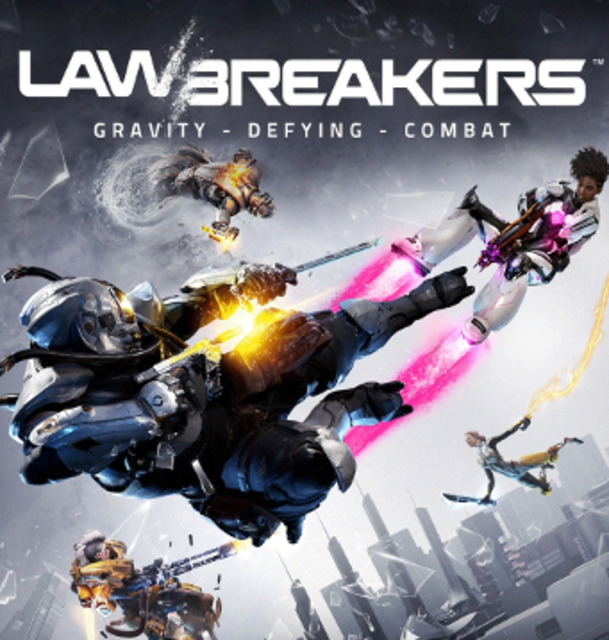