John Mullins returns once again to save the world from a terrorist organization bent on destroying it through chemical warfare.

Soldier of Fortune II: Double Helix is the sequel to the 2000 Raven Software developed first-person shooter, Soldier of Fortune. The SoF series is particularly well known for its gory contents as numerous body parts on a human model can be blown off with bloody results thanks to the GHOUL 2.0 engine. They're also known for their modern military settings which take place in real world locations. SoF II continues those key points and adds in a few new gameplay additions as well. For example, one mission has you sneaking around a drug lord's mansion grounds and you must avoid detection by any of his guards. However, the vast majority of gameplay is still your standard FPS fare with real world weapons as you gun down dozens of terrorists in your way.

The player once again takes control of John Mullins, the same mercenary hero from the first game. This time he must track down a global terrorist organization bent on mass destruction using chemical warfare. This takes Mullins all over the world with such locations like a Columbian jungle and dockside in Hong Kong. All the while, he must also fight to find out who the mole is within The Shop, the organization he works for and who pays him for the many missions he takes on. Joining him is his old buddy, Sam Gladstone, and his new partner, Madeline Taylor, helping him from time to time throughout the story.

According to Raven Software, a few of the missions were actually based on real-life John Mullins' assignments.

Soldier Of Fortune II: Double Helix contained 22 weapons, 25 if you include dual welding, all of which are real world weapons. Also in your arsenal is Thermal goggles as well as Night vision. Most of the guns have there own firing mode: auto, burst, and single shot, they can also be equipped with different extras such as a grenade launcher. Weapons are as follows :

The game also had a unique system for its time:  Randomly generated multiplayer maps.  The system was great on paper, maps that were always different, but the system was clunky and often failed to compile a map that was even close to functional.  If, by chance, you came across a map that was actually worth checking out, you could record it via a code and anyone who typed that specific code would get the same map that you had gotten, without ever having to download the map; it was all coded into the system.

The Gold Edition of the game was released 25th of February 2003. Some of the changes include: 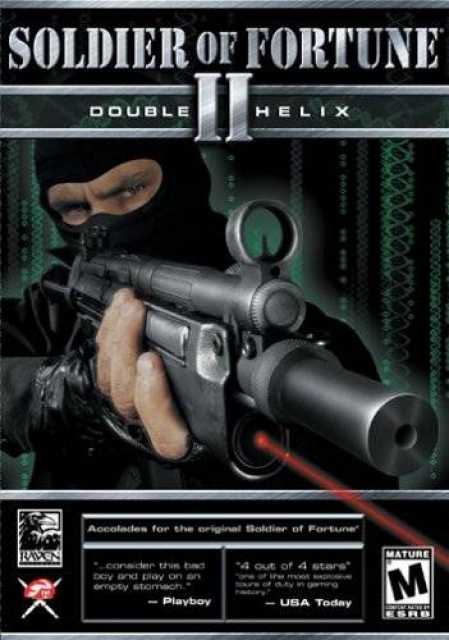