Wild Arms 3 is an  RPG with traditional Japanese Role Playing staples. A hand drawn art style with the expected wide eyed anime characters,  on a quest to save the world from certain destruction. The story again takes place in the world of Filgaia, the old west themed universe of the previous two games. Virgina Maxwell and her three compatriots Gallows Carradine, a Native seeking a life outside his village and expected preisthood. Clive Winslett, a bounty hunter trying to provide for his family, and Jet Enduro an amnesiac looking to peice together his past. All traveling the vast desert wastelands that have overtaken the land looking for a way to return the once lush planet to it former glory.

When traveling the over world as in previous Wild Arms your destination won't be apparent, having you to actively search for the town,dungeon,tower etc... needed to continue the story. Encounters happen at random however you may cancel the encounter with a timed button press, You can only do so a set number of times as this is attached to a points meter which will deplete quickly. It is also possible for your party members to be caught alone in a fight, having to wait several turns for their comrades to appear in battle adding danger and potential for death from any small encounter. The battle system is the expected turn based system however the action on screen takes your characters out of rank and file order letting them circle and move amongst the enemies. While in combat your special attacks summons and magical attacks are governed by "Force Points", costing a certain amount each time you use said skill. Basic attacking also gets a twist having to reload your weapon after so many shots injecting strategy when combining fire with partners. While not ruining anything healing items are handled in a unique way in this game as well.

Wild Arms has a beautiful score from the Composer on the original Wild Arms and it's sequel, anime sequences round out and tie in the visuals throughout the game. Wild Arms 3 is a terrific game that mixes the same stale JRPG genre just enough so both hardcore, and new-age role players alike should find something to enjoy. 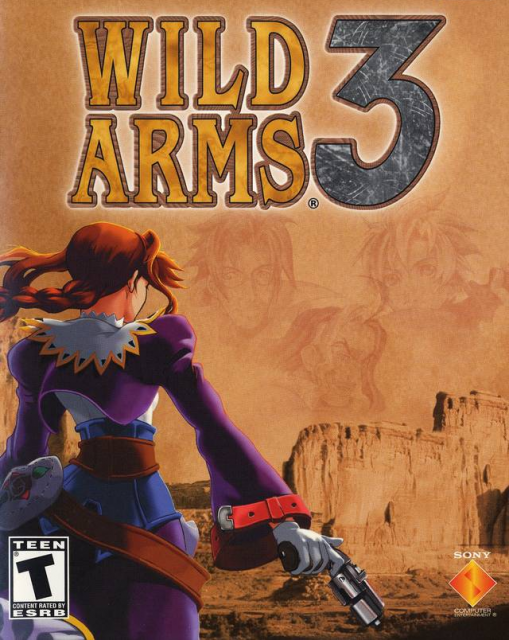