A horror action-RPG developed by Dontnod Entertainment. In Vampyr the player takes control of a vampiric doctor during the 1918 'Spanish flu' pandemic in London.

The protagonist of Vampyr, Dr. Jonathan Reid, returns home after serving in World War I to a widespread outbreak of influenza. He is attacked shortly after his arrival, waking up some time later having become a vampire. The game explores themes of the protagonist struggling between his roles of doctor and vampire, simultaneously being pushed towards both healing and hurting those around him. Over the course of the game players will converse with the inhabitants of four districts of London and will have to make a number of moral choices.

Vampyr is a third-person, story-focused action-RPG. The game features four districts of London, each with its own cast of characters. Every character in the game can be spoken to at length, as Reid explores their personal stories and relations they may have with the other inhabitants. Through these conversations, players can unlock Hints that open up new dialogue with other characters. For example, one NPC may reveal a secret about another character. Reid can then ask the other character about this the next time they speak. Hints can be become permanently 'Lost' if the player fails to convince a character to give up the right details.

As more Hints are revealed about an NPC, their Blood Quality improves. Blood Quality determines how much EXP will be gained should the player decide to feed on the NPC, a feature called Embracing. Embracing an NPC kills them, and the EXP is used to unlock and upgrade vampiric abilities for use in combat. Embracing a character can only be done after Mesmerizing them, wherein Reid leads them to a dark area out of sight of witnesses. Every character has a Mesmerize level, representing mental fortitude, that determines how easy they are to manipulate. Upgrading Reid's Mesmerize ability happens through story progression. As such, an NPC's Mesmerize level essentially determines how soon in the story they can be killed.

The other determining factor of Blood Quality is character health. NPCs can be stricken by fatigue, headaches, pneumonia, and other afflictions. Reid can craft cures for these ailments and heal them, raising their Blood Quality.

Each district has its own measure of health, determined by how many its characters are alive and well. Districts become destabilized by deaths and illness, and if the situation becomes too severe it may be become hostile.

Throughout Vampyr, Reid does battle against vampiric 'Skals' and vampire hunters. Combat is melee focused, though Reid does have access to some firearms. Vampiric abilities include claw attacks, blood spears, and more. Dodging and swinging melee weapons cost stamina, while vampiric abilities use blood. Blood can be gained in combat by successfully stunning an enemy and biting them.

At any of the hideouts located throughout London, Reid can use a workbench to upgrade his weapons and to craft cures as well as serums, consumables used in combat. 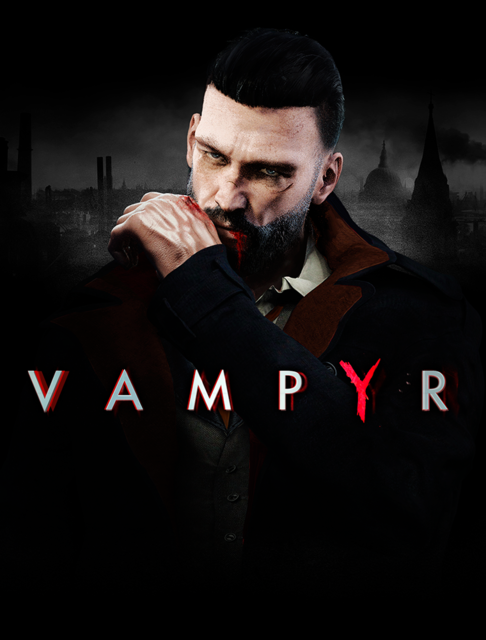