An early arcade platformer that has 100 levels. Released by Taito in 1986, it was one of the first games to feature two-player cooperative play and multiple endings.

Bubble Bobble is an arcade game created by Taito. The arcade version of the game was released in 1986, with console and computer releases coming soon after. The game is a co-op platformer starring twin dinosaurs named Bub and Bob as they travel through one hundred one-screen levels. Bubble Bobble became very popular, inspiring a number of sequels and spin-offs.

It was one of the first games to feature two-player cooperative play and multiple endings.

Bubble Bobble follows Bub and Bob as they venture through 100 different levels. The dinosaurs have the ability to blow bubbles, which they capture enemies within. Once an enemy is captured inside of a bubble, Bub and Bob must pop the bubble to defeat the enemy. Once defeated, the enemy will fly off and turn into a tasty treat, which can be snagged by Bub and Bob for points. The object of each level is to eliminate every foe. When one foe remains, they will become enraged and move faster. If Bub and Bob take too long, ghost whales will come and destroy the dinosaurs. Each level consists of one screen with a complex series of blocks. Bub and Bob can jump through thin layers of blocks, as can their enemies. There are two holes on the top of the screen and two holes on the bottom. All characters can travel through these to the opposite side of the screen.

There is a large number of enemies, all of which have different traits. The most basic of these enemies is a small, square robot that runs around. Others include witches that create boulders,

whales that bounce around, helicopter blobs, and more. As the game progresses, more enemy types appear in all sorts of locations, and the challenge comes in figuring out how to take out each type of enemy. Some offensive items that will commonly appear are waterfalls and lightning bolts. Waterfalls will sweep up any characters they pass and dump them down the hole. Lightning bubbles will fly horizontally across the screen, shocking anything they touch. There are also powerups that create short bonus rounds, such as one that spreads large cookies over the screen, and the players must gather them before the time runs out.

There are a large variety of powerups to collect in the game, and some must be used to safely complete a level. Each one arrives randomly, and many are quite rare.

Bubble Bobble was well received in arcades. In Japan, the Gamest Awards gave it the Silver Award for being one of the four best games of 1986, along with Taito's own Arkanoid, Sega's Fantasy Zone and Tecmo's Rygar (Gamest, The Best Game 2: Gamest Mook Vol. 112, pages 6-26). In Europe, Bubble Bobble was the most popular arcade game on Euromax's nationwide UK charts during the period of May-July 1987, above Capcom's 1942 at second place.

The arcade game also received positive reviews from European critics. In the November 1986 issue of Computer and Video Games, Clare Edgeley described it as an "addictive" game that "sounds quite easy", letting "you in gently", before "the nasties get faster, more of them appear and they're harder to catch." She stated the "continue play facility" is "a great help and allows you to see much more of the game" if "you've got the cash", and the "two player option is more fun as" both "can act as a team" to "clear the screens quickly" and "get to the harder levels." She also noted "the sense of competition is heightened as the player who grabs the fruit gets the points, regardless of who burst the bubbles", which "fast develops into a race against each other." In the April 1987 issue of Crash, Gary Penn described it as a "deceptively simple" arcade game "that proves very addictive and lots of fun to play." He concluded that it was "very compelling" and recommended readers to "Invest a few coins as soon as you can."

The home console and computer ports were also well received. Mean Machines gave the Game Boy port of the game a score of 91%, noting that while some changes had been made, the game played identical to the original arcade port and "provides much addiction and challenge". The Spectrum version was voted number 58 in the Your Sinclair Readers' Top 100 Games of All Time. GamesRadar ranked it the 24th best NES game ever made. The staff praised its advancements over other platform games of its time and its use of multiple endings. 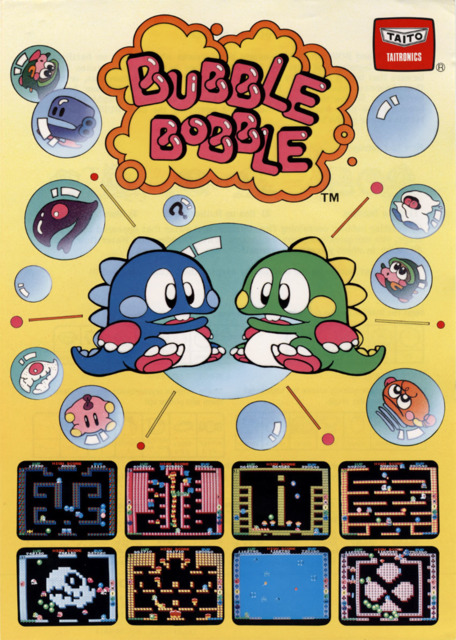