Operation Flashpoint is a combat simulator released in 2001 by Codemasters, the game has been praised for its accurate portrayal of combat scenarios, and has been used in virtual training by the United States Marine Corps.

Operation Flashpoint: Cold War Crisis (also known as ArmA: Cold War Assault) is a tactical shooter and battlefield simulator developed by Bohemia Interactive studio and published by Codemasters. Operation Flashpoint is the base of the virtual military simulator VBS. It was released on June 22 2001 in Europe and August 30 2001 in North America.

Two expansion packs were released; Gold Upgrade, which included Red Hammer, a campaign from the Soviet perspective, and Resistance, which introduced various new features and improved graphics and sound effects. Operation Flashpoint was praised for its attention to realistic combat.

The game was re-branded and re-released to bring it in line with Bohemia's ArmA franchise. Owners of the original Operation Flashpoint can download a free patch to bring their game up to date. It's also available on Steam.

Set in 1985, the game puts the player on one of three sides in a hypothetical conflict between NATO and Soviet forces.

In the story Mikhail Gorbachev has come to power in the . While his Glasnost and Perestroika reforms are welcomed by the western governments, there are a number communists in his own government that are unhappy about the changes.

one of these men, a general named Aleksei Guba, is determined to bring down Gorbachev and make himself the next leader of the . Guba commands an army on the island base of Kolgujev. Nearby is Everon; an independent republic, and ; another republic which has a strong NATO presence. Guba invades Everon, crushes the militia force there, and secretly plans to take the war to the Americans.

The NATO army on , is under the command of the American Colonel Blake. Blake orders the army to move in to investigate the loss of contact with Everon, and reports an invasion by an 'unknown hostile force'. When a helicopter of troops sent to investigate doesn't return, Blake orders a full scale invasion of Everon, not knowing about the Soviets, and the deadly conflict that would lie ahead.

In the game the player can take the role of 4 characters:

Arma: Cold War Assault's gameplay varies a lot depending on the player's role, but the game is best described as a tactical shooter with significant vehicle elements and a little bit of real-time tactics elements. Operation Flashpoint's gameplay is largely team based and the player spends

most of the game with a squad of up to 11 AI controlled members, either as a member of the squad or as its leader.

On-foot gameplay and the vehicle elements are blended seamlessly and the player can get into any available vehicle at any time, so long as his orders permit it.

Whether on foot or in a vehicle the player can view the action from both first and third-person views, as well as an additional 'command view' available to squad leaders which gives the player a limited birds-eye view of the surrounding area.

At the start of each mission, after the intro movie, the player is shown a briefing explaining the situation, describing the goals of the mission and also provides further information in the form of notes.

Once in-game the player is provided with a map, compass, watch, and a notebook. Depending on the mission the player may be required to participate in and complete a number of tasks, that range from simply driving a truck or guarding bases to attacking or defending various objectives, patrols, reconnaissance and sabotage behind enemy lines, air support, or any combination of these and more.

Eventually the player is given command of an AI-controlled squad, they can give their men a large number of orders, either via a series of menus or simply by selecting the soldiers and clicking a place in the world or the map. As well as advising them how to act, players can order their men to fire at specific targets, move to a certain location, get in or out of vehicles, watch certain directions, man fixed weapons, and even some 'special' actions such as repairing vehicles.

The multiplayer features the usual modes: 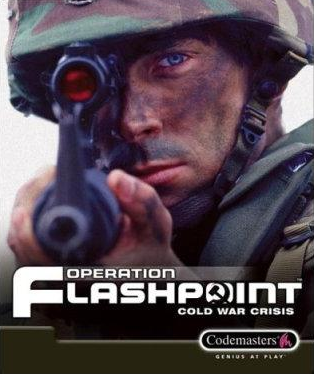