Thunder Cross is a sci-fi side-scrolling shoot-'em-up developed and released by Konami for arcades in 1988.

Similar to the Gradius series, Thunder Cross puts players in one of two starfighters of the Space Force (the Blue Thunder 45 or the Red Thunder 24) as they battle mechanized alien hordes (Mechanikons) invading the colony planet Hanium IV. It features two-player simultaneous multiplayer and a power-up system similar to other Konami shoot-'em-ups (such as Life Force and A-Jax).

Three versions of the game were released, two in Japan and one worldwide. The worldwide version features numerous differences, changing the stage order, power-up system and control schemes. The game later received a sequel in 1991, titled Thunder Cross II.

While the game received no home ports at the time, it was later released for the PlayStation 2 in Japan on February 8, 2007 as the eighteenth entry in HAMSTER's Oretachi Gesen Zoku series. It was also digitally re-released as part of HAMSTER'S Arcade Archives series (featuring all three versions), once for the PlayStation 4 (exclusively in Japan) on June 8, 2017 and once for the Nintendo Switch (worldwide) on February 11, 2021. It was also included in the Arcade Classics Anniversary Collection compilation for the Xbox One, PlayStation 4, Nintendo Switch, and PC on April 2019. 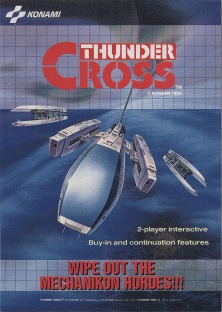